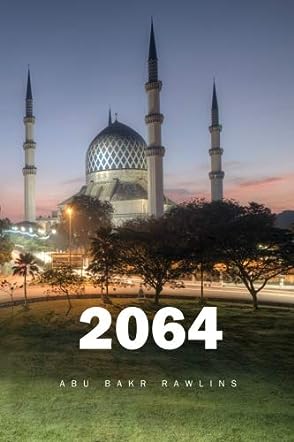 In 2064, the title of the book by Abu Bakr Rawlins, the author projects this is the year a global caliphate will be established. The mission statement of his Islamic organization is: To establish Islamic Shari’ah under the leadership of a rightly guided global caliph. To this end the book provides a road map on how this aim can be achieved. Quoting extensively from the Koran and Islamic scriptures, he outlines the main principles of the Faith and how to reach out to non-believers. Using tried and tested techniques, he provides advice and guidance on setting up Islamic businesses using funds provided by Muslim organizations, creating Halal business parks and encouraging Muslims to use products and services from such organizations. He encourages Muslims to enlarge the number of the faithful by producing more children and ensuring that those same children are brought up under a strict Islamic code, and to stand for office and engage in both local and national politics. He sees no reason why a Muslim president should not occupy the White House. The book concludes with detailed guidance on fundraising, preferred business types, educational and promotional aims, acquisition of real estate and media companies, the structure of the proposed caliphate and its ultimate aims.

It is difficult to argue against the principles of Islam; the basic tenets of the religion are pretty much the same as the Jewish or Christian faiths - the Koran even recognises earlier prophets such as Moses, Abraham and Jesus as predecessors to Mohammed. They are familiar principles that we have grown up with, but somehow manage to seem alien when presented by Muslim scholars. The constant use of Arabic words in 2064 enhances this feeling of alienation and Mr Rawlins would do well to take his own advice on the subject of reaching out to the non-believers.

However, after hundreds of years of moderating and enlightening our views on the role of women, sexual practices, homosexuality and blasphemy, it would seem a massive step backwards to suddenly find punishments such as flogging, amputation, stoning or execution back on the agenda. The project may also find the example of existing Muslim countries a problem. Saudi Arabia, Iran, Pakistan, Syria and others are hardly good examples of Islamic states. And, of course, there is the constant battle between the Sunni and Shia factions within the faith, not to mention the numerous offshoots - the Sufis, Ahmadiyyas, Alawites and more. Who will be in charge? And how will the infighting be prevented? Rawlins's 2064 is a bold, ambitious project but, perhaps fortunately for our Western democracies, one which has little real chance of success.