Jocki MacTavish and the Refugees A Brief History of Classical Music

A Tale of Time, Tonality and Timbre
by Arthur Wenk
Non-Fiction - Music/Entertainment
318 Pages
Reviewed on 08/29/2017 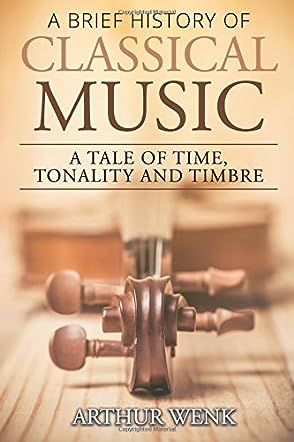 What is music? The definition of this art form has dominated the study of music for centuries, but perhaps in its simplest form music is an organization of sounds which comprise time, tonality, and timbre. Taking these three concepts into consideration, one can delve more deeply into multiple variations. Time exists in historical time, measured time, beating time, repetition, duration, direction, and synchronicity. Tonality and timbre are relative to the historical time, as much as the other qualities of musical time relate. For example, as musicologist Arthur Wenk writes, “In contrast to the almost monolithic quality of time in a movement of Baroque music, music in the Classical Period takes a much more playful attitude toward music time.” This becomes evident in the extended use of a melodic motif and even its repetition, not just in the main key, but also in relative keys as well, changing the tonality but not necessarily the melodic motif, although Classical composers also like to play around with the melodic motif, changing it by inverting it, playing it backwards, or just presenting fragments of the motif as if teasing the listening audience.

Arthur Wenk’s A Brief History of Classical Music: A Tale of Time, Tonality and Timbre takes a huge topic, music history, and provides a unique approach to musical appreciation and comprehension. He begins his study with a thesis of his intent and then continues with the simple music of the Greeks, moving through the Middle Ages into the Renaissance, the Baroque, the Classical Era, the Romantics and the twentieth century. He chooses a few composers from each era to present his point about time, tonality and timbre, and discusses some of the highlights of each era that affect not only the development of music, but also all the creative art forms. Each composer discussed is attached to a specific composition that supports the author’s thesis. Each historical time period concludes with a concise summary.

And, for those who have minimal or no understanding of musical terminology, there is a thorough discussion of music theory at the end of the text, complete with terms and definitions. The book is well sourced and thorough, and even though the author chose only a few composers for each era, his thesis is well defined at each step of his discussion so that further study of other composers in each era can be similarly discussed. In the same way that Alan Gowans of the University of Victoria defended, in the 1980s, the need to study history in art as opposed to the history of art, musicologist Arthur Wenk has presented a need to study, understand and appreciate history in music as it relates to all its vital components of time, tonality and timbre. A unique approach. Well presented. As a retired music teacher and musicologist, I thoroughly enjoyed this read.