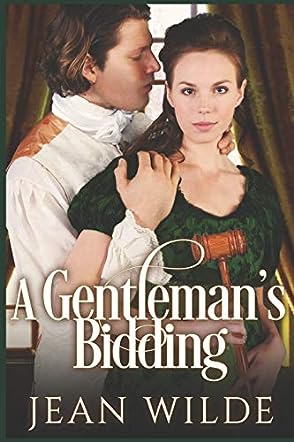 I'm a bookaholic, chocoholic, binge-watching Canadian author. I've loved books every since I was a child and fell in love with regency romances when my mother introduced me to the world of Georgette Heyer at the age of 12. My background is in journalism but I'd much rather write fiction than reality. I live in Toronto with my hubby, 2 children and black Lab.

A Gentleman’s Bidding: The Scarlet Salon Book 1 by Jean Wilde is a historical romance about a young woman who will do anything it takes to save her family from financial ruin, and a man who found love in the strangest of places. Emily Price had recently experienced financial troubles and, as such, had to go to the Scarlet Salon, a brothel, in order to auction off her virginity. She learned about sex from the other prostitutes, and is now ready to secure a deal that not only helps her family, but herself as well. James Hughes is the son of a nobleman, and is looking for some distraction after the busy Season in London. After his friend convinces him, he decides to attend an auction at the Scarlet Salon, if only for a bit of sinful pleasure. When these two meet, what ensues is a romance filled with sex, scandal, and eventually true love and compassion.

When I first read about Emily and James, it was like reading about first love. I was happy the author had incorporated that concept into the novel. While we tend to think of first love as innocent, even pure, there are instances where that love can blossom in the most unusual places, even in a brothel. When James had paid such a large sum for Emily to stay with him, I was rather shocked. I kept asking myself how long before that love for her faded too. I was also enchanted by Annabelle and Mr. Turner’s relationship. Again, it had the same fairytale like quality that Emily and James had, though of course with a more childlike nature to it.

The Scarlet Salon itself showed readers a glimpse of what young women would do when they fell from grace. While some managed to support themselves using skills like sewing and teaching, others might not have those skills, and would have to turn to brothels. Still, despite their backstories, they eventually managed to become businesswomen in their own right. It’d even gotten to the point where women like Genevieve could choose for themselves whether or not they would want to rely on a man. Overall, the relationships between the characters were wonderful to read, and the concepts all revolved around the simple fact that there’s still love in the world, however cruel it may seem. As such, I would recommend this book to those who enjoy historical and erotic romances in general.

I love the novel , so much very happy ending,
This novel remind me of a novel I have read