A Hitman Is Cheaper Than Divorce!

How To Stop Dragging That Breakup Ball And Chain!
by Linda Penner
Non-Fiction - Humor/Comedy
149 Pages
Reviewed on 01/11/2018 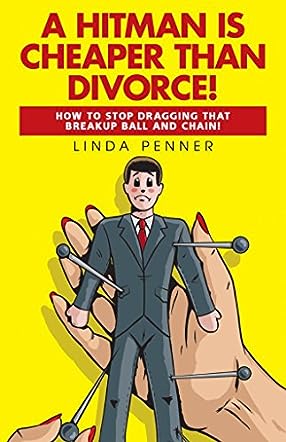 For some reason, Linda Penner's title of A Hitman Is Cheaper Than Divorce! made me think that this book would be a guide for would-be divorcées along the lines of “learn from my mistakes.” Although that turned out not to be the case, what I got instead was an interesting and funny story about Linda’s divorce from her husband, “Hub.” I read the story of a woman who has a fast learning curve to becoming a single mother of three with a fairly uninvolved father, a new, downsized home, and new best friends. Somewhere along the line during their marriage, Linda’s husband shows his true, selfish, self-involved colors. He has a textbook midlife crisis, buying a sports car, dating younger, attractive women, and feeling superior to his home life, especially his wife. Eventually and suddenly, Hub packs his bags and takes off. He quickly learns how to use the kids, “Daughter,” “Middle Child,” and “Pee-Wee,” to manipulate Linda into doing what he wants, like selling the house, or picking up the slack when he cancels his days with the children.

The author eventually hits rock bottom with a combination of hopelessness and biting humor. That’s when she decides to make big changes. Forced to sell the house, she eventually realizes that it was a good idea to do so. Linda goes out of her way to meet new people, especially her new best friends, Danni and Jennifer, single women who help ease Linda back into the dating scene. There is a chapter detailing, in their own words, the worst dates that some women have had, which is wildly funny. A Hitman Is Cheaper Than Divorce! ends on a happy note when a fix-up date happens to pay off for Linda Penner with a long-term relationship with a not-so-handy handyman.