A Tale of Two Wise Fools Edge of the Abyss The One Who Loves You 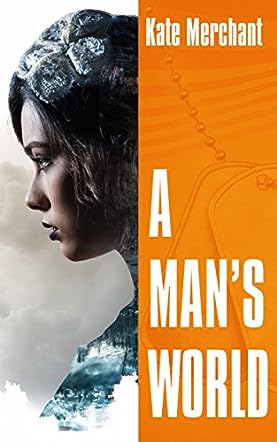 Kate lives just outside Washington DC with her husband Rob and two children. A native of California, Kate, divides her time working, writing, reading, and trying to look after her husband. For fun, Kate and her family enjoy watching Netflix and Hulu and wandering the aisles of Ikea in search of a good deal or perfect Swedish meatball.

To find out more about Kate's work and get a FREE book, visit my website at https://www.kemerchant.com/free-book.

No doubt about it, A Man’s World is written by a woman, Kate Merchant, for women. Any woman who has ever lived through the misery of male domination, where her voice and choices are controlled by a husband or partner and, worse yet, are the result of her own parents’ outlooks and attitudes will relate to Lilly’s story in A Man’s World. A graduate of a New York finishing school in the sixties, Lilly does what is expected of her: she marries Gregory, a successful lawyer, not for love but for status. That’s what good daughters of socially prominent families have done for decades. But Gregory is narcissistic, cruel, manipulative and totally unfaithful. When Lilly stumbles across him shagging his secretary in his office, she snaps. Demanding a divorce, she enrages not just Gregory but her own family who expect her to put up and shut up. That’s her lot as a woman. But Lilly’s rebellion against the system has just started. By the time Gregory, her parents and the gossip mavens have gotten over the shock, Lilly has moved to California, not to join the hippies as everyone thinks, but to find her own power and rid herself of the ties that bind and have sapped her strength and freedom.

A Man’s World is a long book, covering a couple of decades and addressing numerous important social issues, including racial and other prejudices, social inequality, familial obligations, PTSD resulting from the Vietnam War, drug use, domestic violence, white supremacy groups and, above all, women’s rights. Female readers will find themselves cheering Lilly on in her quest to be her own person and successful in both her business and personal life. It’s one tough battle for many people of both genders. Style-wise, A Man’s World relies heavily on narrative, which slows down the pace, but in the long run it’s worth the time you will spend reading this story. So grab a cup of hot chocolate, curl up in your favorite chair in front of a cosy fire and let Kate Merchant entertain you with her perspective on why this is A Man’s World…unless a woman decides it isn’t!