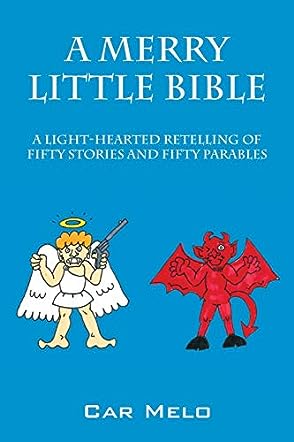 A Merry Little Bible: A Light-Hearted Retelling of Fifty Stories and Fifty Parables by Car Melo is a sort of Cliffs Notes for the Bible, but with the irreverent humor of a David Sedaris or Samuel Clements. Well-researched with actual Bible references, Car Melo reduces the stories of the Old and New Testaments to 270 pages of power-packed information. We begin our tour with the reminder that “To understand…we need to step outside the Bible and keep in mind a historical timeline of Israel’s neighborhood, primarily Canaan and Mesopotamia.” Melo reminds us that the first writers were Sumerians, who divided the day into hours and minutes, the seasons into seven-day weeks, the circle into 360 degrees, and etched their stories in clay about six thousand years ago, which is when the Bible’s Elohim created the world. And Melo does not think this is a coincidence. All the familiar names and stories of the Old and New Testaments are here: the mighty YHWH who called himself "I am" and Elohim, aka God, Adam and Eve and the Tree of Life, Noah and the Ark, Moses and the Ten Commandments, Jacob, whose sons would become the twelve tribes of Israel, Samuel and the Ark of the Covenant, King Saul and David, Esther, and Daniel in the lion’s den, Ruth, Naomi and Boaz and Abram, Sarai and Lot. Some not so familiar are here as well, including Tecla, a follower of Paul and saint of the early Christian Church. We read about warriors and giants, royal sages and beauty queens, kings and saints, prophets and prostitutes. We learn that the Old Testament presents two views of creation and the New Testament two stories about Christmas, and we learn that the devil makes his entrance in the New Testament, as he verbally spars with Jesus. We learn how to interpret “Bible speak,” the geography and culture of “Bible land,” and how to better interpret Bible numbers.

I know the stories of the Bible in single bites, but if called upon, I could never hold my own in a Bible group. This book, however, taught me a great deal - how we went from Adam and Eve to Noah and on through the Old Testament to Jesus and his apostles from the New Testament. I found this book well-written, easy to read, funny, and a wonderfully cohesive religious lesson. I loved that Melo included information from various religious texts, including the King James Version, the Catholic Bible, the Septuagint Bible, which is the Greek Old Testament, and the Masoretic Text, which was “primarily copied, edited and distributed by a group of Jews known as the Masoretes between the 7th and 10th centuries CE.” The 50 chapter titles include intriguing titles like “Thus Saith The Ass,” “Sinful Census,” and “Devil Quoting Scripture," and, like any good headline, make you want to read the following story. While the stories are funny, readers learn from them, and small print footnotes provide relevant facts to add details to the humor. Parable Shorts round out the religious history lesson. Read this informative but hilarious little book with an open mind, and you too will be able to hold your own at your next Bible study group.