A Murder On Wall Street 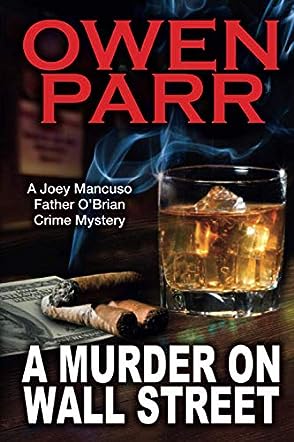 Lets face it, everyone loves to solve crimes, and I'm no different. Arthur Conan Doyle, creator of the Sherlock Holmes stories, inspired me to create memorable characters like, Joey Mancuso, and his brother, Father Dominic O'Brian, in a contemporary setting, New York's Financial District. I take my over 30 years with Wall Street firms, and infuse plausible fiction, which allows the reader to savor a fresh crime story.

Settling in to read a murder mystery is always a satisfying experience, and with A Murder on Wall Street by Owen Parr, it is also an enjoyable one. In it, readers discover some lovable key characters in the form of Joey Mancuso, a former NYPD homicide detective who left the force in the midst of some “cooked up” charges with Internal Affairs, and his older half-brother, Father Dom, who loves solving mysteries and who is beloved by those around him as a priest with a keen understanding that if he lives his life as a testimony to others, he needn’t preach to them. Together the brothers own Captain O’Brian’s Irish Pub and Cigar Bar in Manhattan’s Financial District. There they meet a wide variety of patrons and from there, they work together to identify the guilty parties behind a series of crimes, beginning with a murderous shove of someone from a high rise, and quickly moving on to the hit and run murder of one of their key witnesses. Add in some financial thugs who’ve been running a Ponzi scheme, a Marilyn-Monroe lookalike with a string of assumed names, and the varied puzzle pieces, with some intriguing angles, eventually come together.

Owen Parr has created a couple of appealing characters in Joey and Father Dom. They both display caring for one another and for Joey’s love interest, Marcy, for the patrons of their bar, and for their wider community. I appreciated Joey’s sense of humor and found Father Dom a quick favorite. Add in the rush of activity of Manhattan’s Financial District and some information that makes understandable some basic background principles of the financial world (such as how a Ponzi scheme works), and the story achieves depth. While the reason the brothers took on the mystery in the beginning (they didn’t have a client, they just didn’t think the conclusions the NYPD reached were in line with the facts as they knew them), and the method the brothers use to disclose the wrongdoers (a meeting with all of the interested parties, held at their bar), were both a bit unorthodox, the approach was certainly unique. This story moves right along, providing readers with an enjoyable getaway with characters they’re sure to want to revisit in other books in Owen Parr’s crime mystery series.

A Murder On Wall Street by Owen Parr is Volume 1 of the Joey Mancuso, Father O’Brian Crime Mystery series. Retired NYPD detective Joey Mancuso and his half-brother Father O’Brian, a Catholic priest and the polar opposite of Joey, co-own Captain O’Brian’s Irish Pub and Cigar Bar. A bar patron, a hedge fund manager, spends the night at the pub, celebrating a new client but the next day he falls to his death from the 21st floor of a high-rise building. Was it really suicide? Father O’Brian doesn’t think so and, together with Joey, he begins to investigate, a move that could see the seedy underside of Wall Street flipped upwards for all to see; a move that uncovers an awful lot of other crimes. Using the skills he honed as a detective, Joey starts to dig in and together they begin to piece the sordid tale together.

A Murder on Wall Street: A Joey Mancuso, Father O'Brian Crime Mystery (Volume 1) by Owen Parr is a great story, really well thought out with a very clever plot. This is one of those stories that keep you guessing all the way through, with a plot that never deviates from its course, with plenty of suspense and action to keep you reading to the very last second, and a cast of characters that you kind of expect to see in one of the old-fashioned murder mystery TV shows. The characters have been developed thoroughly, laying the way for what I hope will be more stories in this series. Be prepared for a mystery that twists and turns its way to a conclusion you won’t see coming with characters that you will come to know personally. Great story, I loved it.