A Note of Scandal 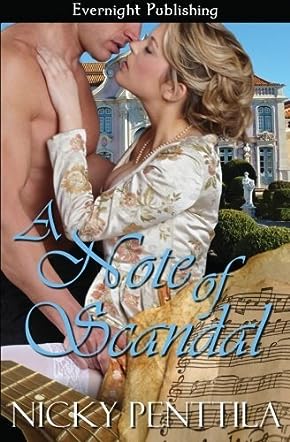 Nicky Penttila writes stories with adventure, ideas, history, and love. She enjoys coming up with stories that are set in faraway cities and countries, because then she *must* travel there, you know, for research. She lives in Maryland with her reading-mad husband and amazing rescue cat. She’s chattiest on Twitter, @NickyPenttila, and can also be found at nickypenttila.com.

Set in the days after Napoleon has surrendered for the second time, A Note of Scandal touches on more than romance. It tackles complicated timely issues that include the decimation of the middle class man in post-war England, the advancement of the printing press, and the battle between two popular newspapers. Nicky Penttila tells the story of Olivia Delancey and William Marsh, twenty-something composer and newspaperman, respectively. Olivia bucks conventionality in an effort to help her friends and publishes her own music under a friend’s name. This puts her at odds with young William Marsh, whose career goals at The Beacon are to get the scoop and always tell the truth. With the newspaper wars looming and William’s beloved paper at risk, his attention to Olivia is taking his focus from the conundrum of the wounded vet and composer.

A Note of Scandal is full of notes and scandal in true historical romance fashion. Nicky Penttila weaves a brilliant tale of a woman’s place in post-Napoleonic England, the rise of the new middle class, the post war economy and of course, romance. Olivia goes unappreciated by just about everyone she endeavors to help, yet rather than bemoan that fact, she forges ahead in an attempt to make everything better for those around her. And then there’s the romance. It is how a romance should be, particularly given the time period. There is romance, witty banter, and of course stolen moments of sensuality, which make this story sweet and steamy. Throughout the deception, the lies, and misunderstandings, Olivia and William find a way to make a life together without denying any part of themselves, and that is the kind of love we all aspire to have.