Veneration of the Hunter A Purgatory of Misery 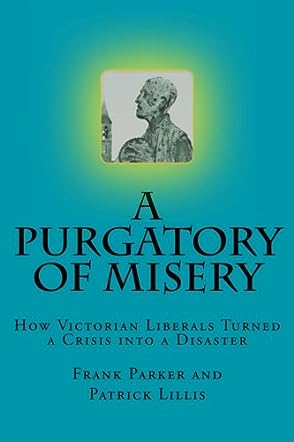 A former Engineer who spent most of his working lfe in England, Frank moved to Ireland upon retirement in 2006. Since then he has attempted to fulfill a long held ambition to write. Like most people he began with a few self-indulgent memoir pieces, but quickly discovered an interest in the history of Ireland and began researching and writing about the people and events that shaped the island's relationship with its neighbor, and with the places to which Irish people migrated.
He lives in the Irish Midlands with Freda, his wife snce 1963. Having dabbled in politics during the 1980s he still maintains a strong interest in current events in the UK and elsewhere. This is sometimes reflected in the posts on his website, alongside articles featuring the background to his research and writing projects.

A Purgatory of Misery: How Victorian Liberals Turned a Crisis into a Disaster by Frank Parker and Patrick Lillis has a comprehensive introduction that places the arrival of William the Conqueror in Britain in 1066, continues through the government of Oliver Cromwell to the restoration of the monarchy, and the defeat of the Irish in 1798 by the British. That history, including the Protestants driving Catholicism underground, the upper classes taking over land, and the financial situation, is covered in greater depth, explaining why the Irish potato famine affected the country to the extent of starvation, or emigration to America. The whole book evidences extensive research into the basis of the Victorian Liberals’ policies that left the wealthy in charge of an empire whilst the poor throughout the UK died of malnutrition.

Frank Parker and Patrick Lillis’s A Purgatory of Misery: How Victorian Liberals Turned a Crisis into a Disaster concludes with Frank Parker summing up his personal views on the two authors’ research findings, and I found myself in agreement with him. I too have travelled in Ireland and admired the drystone walls, without realising they were built by starving men to enclose estates granted to the rich who had no right to them. A million people dying for lack of food in a country that ruled an empire is almost impossible to imagine… almost. Food banks, once restricted to a few big cities, exist in all UK towns. A Purgatory of Misery is a captivating must-read for all who care about equality and compassion in the twenty-first century.