A Rose Blooms Among the Thorns 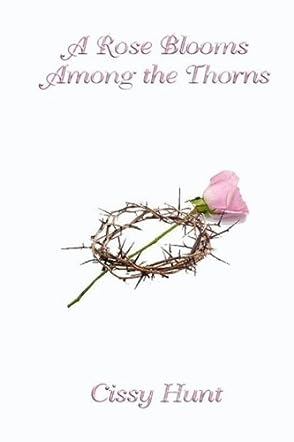 I grew up, attended school, and spent my young adult life around and in central Louisiana. I have been a Licensed Practical Nurse for over thirty-five years, during part of that time I was a travel nurse. Now I live with my husband in Northwest Arkansas in the beautiful Ozark Mountains with our three Pomeranian dogs and two cats. We live out of town in the country, where I fell in love with the peace and beauty of the area. We live a simple life in that we love to night fish and work in our yard. I have been an ordained minister since August of 2007. I am called to minister to hurting women who carry the emotional scars of domestic abuse. The statistics show that: One in four women (25%) has experienced domestic violence in her lifetime. •Between 600,000 and 6 million women are victims of domestic violence each year. •Women ages 20-24 are at the greatest risk of nonfatal intimate partner violence. • Between 1993 and 2004, intimate partner violence on average made up 22% of nonfatal intimate partner victimization against women. For as long as I can remember I have always loved to write. Growing up a shy person, when I couldn't express myself verbally, one only had to hand me a pen and paper and out would flow my thoughts. I have written poetry most of my life and now my life-long dream has come true. I have written a book. My book, A Rose Blooms Among the Thorns, is about a woman's journey from domestic abuse, through healing, to forgiveness. journey of a woman from domestic abuse through healing At this time I am working on another faith based book.

A Rose Blooms Among the Thorns is a Christian fiction novel written by Cissy Hunt. After a strange, yet familiar telephone call, LaRae quickly packs up her life and moves yet again. A victim of domestic violence, LaRae has been on the run from her insane ex-husband, James, ever since their divorce and she has got disappearing down to a fine art. But James’ stalking skills are finely honed after having had LaRae under his complete control for so many years. The way he sees it, LaRae leaving him had caused James much embarrassment, not to mention defying him, and her being with anybody else was not an option. While moving to a new location, LaRae is followed in her car, but manages to lose them with some quick thinking. While attending a masquerade ball, she is cornered in the garden when alone and when she moves, yet again, James calls her with his usual threat – you can run but you can’t hide! Knowing that James will kill anybody she fraternizes with or who helps her, she changes her name and falls off his radar for a while, but when he catches up with her, she knows he will kill her so she will never defy him again. LaRae’s night terrors are constant and she is soon too afraid to sleep due to a whole new hell which is unleashed inside her mind. With suggestions from people she knows and others she comes in contact with as she runs from James, LaRae soon finds solace in divine guidance and turns to God to try to restore some sanity in her life. If she survives what James has in store for her, LaRae just might find some peace.

As a domestic violence survivor, this story really hit home for me. James' obsession to find and teach LaRae a lesson, her determination to escape him forever and become a survivor – it is unfortunately a story that is true for so many women. Cissy Hunt has captured LaRae’s terrifying perspective quite accurately, while also bringing to life the thoughts of a madman who thinks of LaRae as his possession, making the divorce irrelevant in his eyes. The story is an important one, showing the true struggle that battered women fight every single day. Although victims never think they will make it, the ones that do become survivors, determined to help other victims live through their ordeal and restore peace and hope where there had been none for so long. A Rose Blooms Among the Thorns is gripping, heart-wrenching, terrifying and realistic, and shows that sometimes you can find strength in a much greater power than your own. I recommend this book to all readers over the age of 15 and feel it would do well stocked in women’s shelters worldwide.