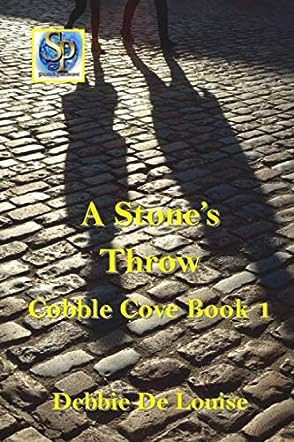 Debbie De Louise is an award-winning author and a reference librarian at a public library on Long Island. She is a member of Sisters-in-Crime, International Thriller Writers, Long Island Authors Group, Romance Writers of America, and the Cat Writer’s Association. She has a BA in English and an MLS in Library Science from Long Island University. Her Cobble Cove mystery series published by Solstice Publishing includes A Stone's Throw, Between a Rock and a Hard Place, and Written in Stone. Debbie has also written articles and short stories for several anthologies of various genres and a romantic comedy novella, When Jack Trumps Ace. She lives on Long Island with her husband, daughter, and two cats.

In A Stone’s Throw by Debbie De Louise, librarian Alicia Fairmont has just lost her husband in a hit and run accident. Six months after the unfortunate incident, she travels from her home in Long Island to her husband’s hometown of Cobble Cove, New York, a place her husband has never thought about taking her to, only referring to it offhandedly as “a backwards town he and his parents moved away from when he was ten and his sister seventeen.” She hopes to get some answers to questions nagging her about his past, but what is supposed to be a short weekend visit suddenly becomes a long stay, thanks to a job she accepts at the library. But she is on a journey to find out dread truths and secrets she’d rather have not discovered.

When she receives news that her house has been burned, she quickly returns home. What awaits her is even more disturbing than the decades-long secrets she’s just discovered at her in-laws. A strange diary, confiscated letters, and an audio recording with a note that warns her to leave the city indicate that she is embroiled in a deadly game and that someone will stop at nothing to get her out of the way. What follows will shock the reader as Alicia faces her deepest fears and reaches out for the truth, one that could even destroy her.

A Stone’s Throw by Debbie De Louise is a gritty tale of one’s woman’s search for the truth surrounding the mysterious death of her husband. Debbie De Louise’s story is intense, absorbing, and emotionally charged. It’s a well-plotted story with strong elements of a thriller. The characters are real and compelling and the sense of pathos is intelligently developed around the protagonist. This is a monumental achievement, a story that will grip the reader by the throat and have them hanging on until the exciting finish. This book was awesome!

Complimentary Copy generously provided by the author in exchange for an honest review.

My Thoughts - Story
I’m highly impressed with this story and the author. The writing is great and Ms. DeLouise has a gift describing in detail the setting and actions. There were times I felt that I was right there in Cobble Cove with Alicia having some tea and muffins or a PB&J.

I loved these characters and how it all unfolded at the very end. I was expecting a dark twist that probably would have upset me but I was happily surprised and closed this book with a sappy smile on my face.

I do have to add that Ms. DeLouise did a fantastic job at twisting and then unraveling each detail of the mystery and I absolutely loved how it all tied together!

Re-Cap
Alicia just lost her husband six months ago in a hit and run accident and to overcome her grief, she feels that it’s necessary to sweep up some lose ends with his past.

She travels to Cobble Cove and meets John immediately. Both are drawn to the other and they proceed to try and uncover all the mysterious things that are starting to happen since she showed up.
It’s an Agatha Christie meets a small town living!

First Rate Read, February 9, 2016
By Page Turners Book Blog
This review is from: A Stone's Throw (Kindle Edition)
I was torn between describing this book as a romance or as a mystery. Luckily it is the best of both worlds. The descriptions and details paint a very clear picture of the people and places and makes you feel like you are standing there taking it all in. This story seems to wrap around you and draw you in to enjoy a rewarding and satisfying story. Alicia and John have chemistry from the very first time they meet and it continues to grow as the story unfolds. There are several twists that allow you to play junior detective while trying to help Alicia solve the mystery of her husband’s past and makes you question the intention of everyone she comes in contact with. I liked this story very much and recommend it to all romance readers that enjoy a little suspense.

Not a typical cozy, not exactly a thriller...a captivating story!
ByIllinois Readeron June 3, 2016
Format: Paperback
A STONE'S THROW is a book that has something for any mystery reader to enjoy. It has cozy elements of a library cat and a family's golden retriever who sniffs out a missing person like a bloodhound. It has romance between a widow and a widower. It has a charming town with fun street names and cute cottages and a town square. There is a library and lots of mention of books we all know.There is a crabby lady who lives like a hermit, and a rude and grouchy cop. But there is a case of a hit and run resulting in murder, an arson, a case of indiscretion that resulted in two children by different fathers and an estranged family, a missing person (another murder),and more that make this so much more than a cozy mystery. Everything adds up to a most entertaining mystery book.
I appreciated the fact that the characters weren't all young 20 somethings with vapid speech. The cute town of Cobble Cove is populated with older people as happens in many small towns after youngsters move away to more exciting lives. The cast of characters range from 40's to 80's, and everyone seemed so vital and interesting that I wasn't really aware of this until the end when the town was undergoing growth and development. It was simply a delightful town full of interesting people.
Let me tell you that this book is one that had twists and unexpected turns. I think I actually gasped at one point. It was a captivating book that keeps you guessing up to the end.

Cozy Mystery Well Written
ByChristina Morganon April 13, 2016
Format: Kindle Edition
Alicia’s husband Peter has died in a tragic hit and run accident. In an effort to deal with her grief, Alicia travels to Peter’s hometown (Cobble Cove) to seek out his family, whom Peter has always been vague and secretive about. Shortly after arriving, she lands a job as the town’s librarian and meets a handsome stranger named John, who takes her on a tour of Cobble Cove and introduces her to some of the town’s colorful and well-written characters. But then a tragedy requires that Alicia return home and John goes with her to lend a helping hand. Soon, Alicia begins to discover secrets about Peter’s death and learns that John may not have been very truthful with her.

De Louise makes a very strong traditional publishing debut with this novel (although this is NOT her first novel), especially considering the very well-developed and vividly described characters (even the secondary and tertiary characters are easy to envision). I enjoyed the plot twists and turns and the mystery that lingered until the very end. Although I’m not usually a fan of pro/epilogues, the end of this book was tied up nicely and answered any of the reader’s questions.

If you enjoy cozy, small-town mysterious with a romantic bend, this is the book for you.

A great read--only a stone's throw away!, February 3, 2016
By Amy Shojai, CABC
This review is from: A Stone's Throw (Kindle Edition)
We meet Alicia at a turning point in her life, having just lost her husband to a hit-and-run driver. But was it an accident? That is just the first question raised, and a host of additional puzzles increase Alicia's suspicions when she tries to learn more about her dead husband's family. He never spoke of them, and discouraged Alicia from any interest in his family. Since she's at loose ends, and trying to decide how to move forward without him, she decides to satisfy her curiosity and visits Cobble Cove to track down his roots.

Of course, she discovers more than she bargained for in this quaint town, filled with delightfully described characters. She's offered a job on the spot--is it providence, or a way to keep her closely monitored? A handsome widower shows flattering interest in Alicia--dare she return his attention? Cryptic messages are left warning her to leave--from a senile crackpot or someone who knows too much? And if so, what do they know?

When someone sets fire to her house, and a hidden diary reveal a somewhat sordid underbelly to this idyllic town--that also reveals her own husband's betrayal--Alicia must decide who to trust. Danger may be only a stone's throw away...

Highly recommended for those who enjoy small town puzzle mysteries with a dash of romance. I was provided an E-copy of the book for my honest review.