All Present and Accounted For The True Story of Katherine Hawelka, Her Murder on a New York Campus, and How Her Family Fought Back
by William D. LaRue
Non-Fiction - True Crime
298 Pages
Reviewed on 04/18/2021 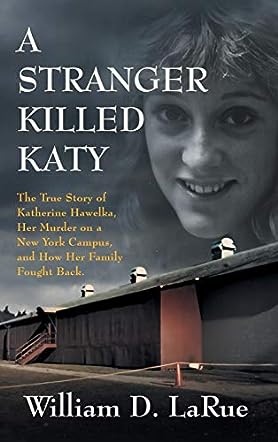 A Stranger Killed Katy by William D. LaRue is the True Story of Katherine Hawelka, Her Murder on a New York Campus, and How Her Family Fought Back. On August 29, 1986, a stranger arrived in town. Just hours later Katy Hawelka, a pretty sophomore, was heading back to campus after a night out when she was brutally raped, strangled, and left for dead. A man, covered in blood, was found hiding nearby but he claimed he found her like that and tried to help. Three days after the attack, Katy died and so the nightmare started. When Katy’s mother, Terry Connelly, learned that the murder could have been stopped, her blood begins to boil. From campus guards to those who allowed the murderer to be free on the streets, Katy’s family is determined to ensure that their daughter’s death would be avenged, that the murderer would pay for his crimes. For more than 30 years, they fight for justice for Katy, not justice for the criminals.

A Stranger Killed Katy by William D. LaRue is a story that will reach deep into you, the story of an innocent woman’s life taken from her by a complete stranger. The story is told in a straightforward, respectful manner, keeping Katy’s family and friends firmly in mind all the while. At times, it is horrific but most true crime stories are and this one recounts everything as it happened. This is more than just the story of a life cut short; it also brings home the fact that justice doesn’t always serve the right people and it's about time things changed to make sure that the victims and not the criminals are looked after. You will be hooked by this book, you will feel true compassion for the family and it will make your blood boil at times too. Fantastically written, a great insight into the legal justice (or injustice, as some people call it) system, and a story that will never leave you.