A Tale of Shadows 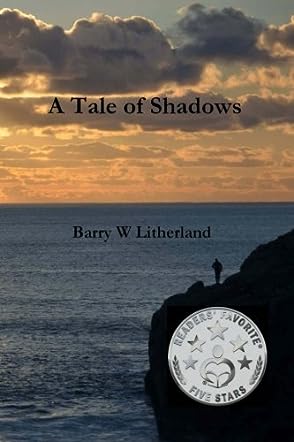 Hi, I live in the very North of Scotland, just a few miles from John O'Groats and I use the area of the North West Highlands as the backdrop to some of my books. It's like an extra character to me. I like to write crime /mystery thrillers with subtle twists, like 'A Tale Shadows'. Was there a murder of wasn't there? It seemed an interesting concept to write a crime thriller where the crime was far from clear until very late in the book. I also like developing characters that readers will engage with and want to know more about. Two of my books move away from the Highlands, like 'Turbulence' (soon to be published) which slips a couple of decades into the future and times of racial conflict in the UK but the scenery of the Highlands always seems to draw me back. Check out my website for photographs of the area, some of which have been used as settings in my novels.

A Tale of Shadows is a mystery/thriller written by Barry W. Litherland. Guy’s heart just wasn’t into being with the others as his friends sat around the campfire and listened to Matt pontificate. They had been best mates at one time, but ever since his sister died, Guy and Matt’s friendship had been strained at best. Guy left the others and gingerly stepped across the causeway to the island to do a bit of exploring. The walk there was treacherous with slippery seaweed and ill-placed rocks threatening to dump him headlong into the rising tidal waters. He knew he couldn’t stay long before the causeway became impassible, and he didn’t want to spend the night amongst the spooky remnants of dwellings that still remained on the island. But then he realized that he had put it off too long, and finally he settled in for an uneasy sleep on the hillside. At first, his fitful sleep was broken by the minute sounds of the voles and other nocturnal dwellers he was sharing his quarters with, but then he heard the distinctly disquieting sound of footsteps. Overcoming his instinctual fear, he looked up and saw Matt striding towards the high cliff overhead.

Barry W. Litherland’s mystery/thriller, A Tale of Shadows, is one of those rare and special books that make you want to tell everyone you know how much you’re enjoying a book you’re reading. I began having that most wonderful feeling after the first few pages, and, if anything, it intensified as I raptly read on. Litherland’s writing is sumptuous and lovely; throughout his work, there’s the sound of the birds that inhabit the Scottish Highlands and the ever-present boom and crash of the sea. His characters are meticulously and finely drawn, particularly Guy; Andrea, the quietly perceptive one of the group who befriends the investigating officer, Detective Sergeant Aaron Marks; and Marks, himself, whose own introspective curiosity and tutelage under his demanding boss and mentor, Jack Munro, has made him a prodigious detective indeed. A Tale of Shadows is a marvelous and unforgettable tale. My first reaction after finishing it was to start looking for more works by this author. Anyone who delights in atmospheric mysteries, psychological thrillers or police procedurals will have a field day reading this book. A Tale of Shadows is most highly recommended.

Barry W Litherland, a former Galloway teacher, is obviously very familiar with and deeply loves the highlands of Scotland. He captures the scenery and the mystic sense of the majesty of this terrain in his book, A Tale of Shadows. This terrain, with its cliffs and steep drop offs into the sea, becomes almost another character in this latest thriller, his third book, a perfect setting for the eeriness surrounding events in the lives of a handful of young adults, who are stunned when a member of their group commits suicide by jumping off one of those cliffs in the dead of night.

Did Matthew, who was full of life and had everything to live for, really commit suicide? Or was he possibly murdered? One of his closest friends, Josh, can't accept the autopsy findings. He suspects another member of the group, Guy, is responsible and is hell-bent on making others accept that explanation. Guy saw Matthew jump. But is Guy's story true? That's what the young detective on the case struggles to determine as he interviews each member of the group and uncovers even deeper buried secrets about others in their circle of friends, including Natasha, Guy's sister, who drowned in a caving expedition some time back, and the very strange Callum who lives in a cottage on Matthew's parents' property.

Litherland keeps readers turning those pages to find out what really happened and even when readers think they have it all figured out, Litherland throws them another curve ball. For the most part, this is an easy to read book, though initially some of the vocabulary, like the word "whilst" and unfamiliar phrases, might make young contemporary readers who don't live in Scotland hesitate. Don't! This is an absorbing read. You might also like to visit Litherland's blog where he reflects on the highlands and provides some wonderful photos. Nice work, Barry!

A Tale of Shadows is a mystery thriller by Barry W. Litherland set in the picturesque northwest of Scotland. It opens with a group of six young men and women, who have been friends since their schooldays, enjoying a camping holiday together. Based in a seaside meadow, they pass the time exploring the countryside, a local waterfall and a deserted island which can only be reached at low tide along a rocky causeway. There is some good-humoured sniping between two of the group, Guy and Matt, but in the evening, while they sit around a camp fire, the banter gets a little too much for Guy and he decides to walk across to the island and visit the tall cliffs on its far side. Enraptured by the views and lost in his own thoughts, he stays too long and finds he is unable to return to the camp because of the rising tide. Chilly and alone, he decides to find a suitable place to await low tide, eventually drifting into a light sleep.

He awakes with a start a short time later, however, thinking he has heard voices, but then he most definitely hears footsteps. Shrugging off his initial nerves he goes off to investigate and finds his friend, Matt, standing on the cliff edge. Turning and muttering some uncharacteristic words, Matt throws himself off the cliff, to die on the jagged rocks below. Guy is shocked and traumatised by this unexpected turn of events, but his nightmare is just starting. While Detective Sergeant Aaron Marks and his unorthodox boss, Inspector Jack Munro, investigate, Guy, along with the rest of the group, must endure suspicion and accusations from friends and relatives who refuse to believe that Matt could have committed suicide. Slowly, as the investigating officers sift through the sparse evidence, seemingly unrelated events that had taken place years before start to cast a new light on Matt’s death. As the threats and accusations multiply and start to spawn violence, can the young Detective Sergeant Marks solve what is becoming a rather desperate and dangerous case?

A Tale of Shadows is an engaging yarn told in the best tradition of rural police procedurals. The area in which the tale is set is beautifully described, the characters solid and well-drawn, the plot carefully structured, with sufficient twists, turns and surprises to satisfy the most demanding aficionado. Detective Sergeant Aaron Marks is an interesting protagonist and his dog, Rosie, a charming sidekick. I was sorry we did not see more of his rather interesting boss, Jack Munro, but I hope the trio will make further appearances as I can see a very interesting series taking shape. The rugged part of Scotland in which the narrative takes place makes a fantastic backdrop and can be very popular, as has been proved by many successful authors from Walter Scott to M.C. Beaton. Congratulations to Mr Litherland for a truly enjoyable tale - I hope we will see more of the interesting characters he has created.