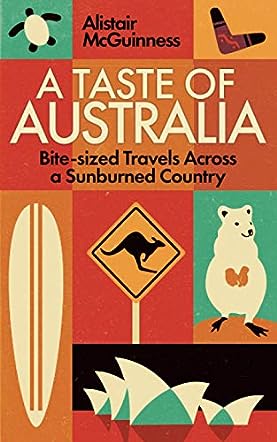 A Taste of Australia: Bite-Sized Travels Across a Sunburned Country by Alistair McGuinness explores Australia through personal stories that will inspire everyone to embark on their own adventures. The various tales feature significant moments in Alistair's life and how the bond he developed with Australia was formed. Get to know Australia through his eyes as he explores the people he met, the places he discovered, and the animals he experienced. McGuinness takes you on a trip through his memories by showing Australia's stunning places, including Ningaloo Reef, Perth, and Kookynie. These bite-sized stories include a campervan trip to Byron Bay, exploring mining camps, and swimming alongside turtles. The stories include My Hometown, Fresh off the Boat, Strangers in the Night, I Walk the Line, Far From Home, and Dreamtime.

Alistair McGuinness's Taste of Australia begins with the crossroads between following his dreams or taking a job with Vauxhall. The latter was chosen, which put his dreams of Australia on hold but allowed him to see other amazing places and meet Fran, who had already traveled across most of the continent. The catalyst of his company shutting down allowed him to have adventures such as exploring the outback, taking surfing lessons at Bondi Beach, and going to Sydney Harbour Bridge. McGuinness captures these memories through bite-sized stories that are vivid, humorous, and detailed. Each story captures the thrill, adventure, and beauty of Australia through the various wonders he experiences. McGuinness introduces various places, several being towns you've probably never heard of before, like the coastal towns of Lancelin, Cervantes, and Jurien Bay.

The various stories feature significant memories from Australia, such as I Walk the Line, which explains why it took three months before he could eat chicken again. These stories give equal insight into the amazing sights of Australia and McGuinness's own life, with scenes showcasing both the stunning adventures the continent offers and the calm moments with his family. The tone of the stories is thoughtful and peaceful, drawn from the reminiscent nature of the storytelling. The writing style is visual. A Taste of Australia contains bite-sized stories about adventure, life, and wonder explored throughout the stunning continent.