Summer of Love and Evil A Thread in the Tangle 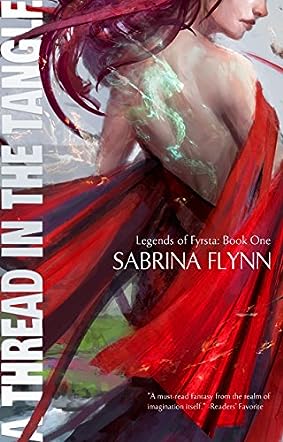 Sabrina lives in perpetual fog and sunshine with a rock troll and two crazy imps. She spent her youth trailing after insanity, jumping off bridges, climbing towers, and riding down waterfalls in barrels. After spending fifteen years wrestling giant hounds and battling pint-sized tigers, she now travels everywhere via watery portals leading to anywhere.

Author of two series: Ravenwood Mysteries and Legends of Fyrsta.

It had been an accident; how could a youngster of four be expected to control her powers? But her father had not seen it that way. In his eyes, like any parent of a nymph, she was just a product to be sold when she came of age, but this object had almost killed his heirs. He wanted her to waste away in a dungeon until such a time that the bidding could begin. Oenghus intervened, taking the child to a place where he could watch over her. But it was not the end of the matter. The Emperor wanted his money, and he would reclaim her when she came of age. However, he is not the only one with his eyes set on the nymph. Wars have been fought over their kind since the Shattering, when hunting parties first pursued the druids to claim their nymphs. Women had been in short supply, humanity nearly driven to extinction, and a nymph became a prize of unthinkable value, and yet those who should have protected them condemned them instead. Isiilde is worth a king's ransom for more reasons than one. In all his time, the Arch lord had never seen one as unique as her, then again, given the hidden truth of her conception, perhaps she had received more from her father than he knew. Can her protectors really hope to build a life for her when the law already dictates what her life will become. Isiilde is not as submissive as the rest of her race, but can she find the courage to reveal the truth and carve out a new future for herself? Follow the gripping struggle in Sabrina Flynn's A Thread in the Tangle (Legends of Fyrsta Book 1)

A Thread in the Tangle is like reading magic, and it is rare that I get so excited about a book. Sabrina Flynn truly has made this a tale where every word can be savoured. She brings to life settings, feelings, and even relationships. There is something effortless and captivating to the writing style that speaks clearly of the writer's talent. I will, without a doubt, be seeking out more work by this author. Much like the power the nymphs hold over men, her style has seduced me. I've always loved a good fantasy, and Sabrina Flynn has delivered on all her promises to readers in this magnificent story. I adored Isiilde's character and the wonderful and unique relationships she cherishes with Marsais and Oen. I loved her quirks, her mannerisms, and her sometimes accidental mischief. Being a nymph sees her being undervalued and scorned as she tries to lead the life of a human, but she is a wonder, an amazing character who thrives and grows with each turn of the page. A must-read fantasy from the realm of imagination itself.