A Victory that Counts 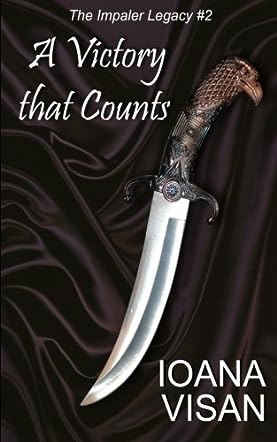 Award-winning writer Ioana Visan has always dreamed about reaching the stars, but since she can't, she writes about it. She made her debut in English with a short story published by Every Day Fiction, and also has one included in Evolved Publishing's "Evolution: Vol. 2" short story collection. After fighting the apocalypse aftermath in "Human Instincts", she played with shapeshifters in “Blue Moon Café Series: Where Shifters Meet for Drinks”, and then she dealt with vampires in “The Impaler’s Revenge”, before tackling longer works like a fantasy trilogy and a science fiction series.

In A Victory that Counts, Liana Cantacuzino and her fellow pandurs have to work with the vampires to stop a new breed of vampires that are dangerously growing in numbers. Written by Ioana Visan, this is the second installment of The Impaler Legacy series.

To be honest, I was a little bit lost in terms of characters' background and wished that I had read the first book. Even so, this is a minor setback and did not deter me from enjoying the story. I like the sharp and well-crafted dialogue. The plot is good and well-written; although I realized that I would have to read the previous installment to grasp the whole plot better. This is the best vampire-themed fiction I have read in years. I instantly gravitated toward the protagonist, Liana, who gives off the alpha female vibe right away but is still vulnerable. Her relationship with Jesse is more like best friends instead of lovers. I’m used to reading about alpha female protagonists with partners who are equally strong in terms of personality. However, the pairing of Liana and Jesse makes sense for this story, as Jesse is able to balance Liana’s fiery nature.

Along with great pacing and flawless prose, the fighting scenes are excellently depicted and the suspense element is high from start to finish. Overall, Ioana Visan knows her craft well; there are enough loose ends dangling at the conclusion for readers to crave a follow-up, Order Restored, which is indeed in the works. In other words, a cracking read.