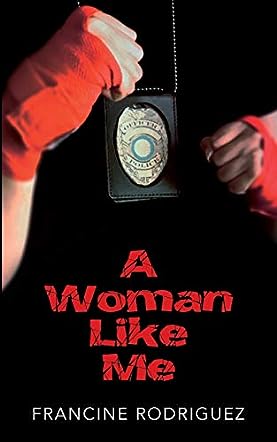 If you’re going to write a long fiction crime thriller, you'd better make sure of three things: you have a really great plot, gripping characters, and most important of all, the skill to create a true page-turner. Well, Francine Rodriguez certainly followed that mandate in A Woman Like Me. What a read...so riveting that I nearly missed a doctor’s appointment when I couldn’t put the book down! Her un-named protagonist is based on the life of a real person, a former female cop currently on death row for several murders. What on earth happened in her life to bring her to this? Was it the fact that she was born in the slums of Manila where she had an early introduction to the life of crime that resulted in her murdering two people? And how does a murderer end up as a US cop whose eye-opening experiences as a female member of the force lead her to murder again? Enough of a thrilling plot for you? Believe me, that’s only part of the full story and if anyone doubts that adage “truth is stranger than fiction”, the truth in this book will change your mind.

But it’s not just the plot that keeps you turning the pages. It’s the character and motivations of the protagonist that capture your imagination. She is full of rage that she struggles to keep under control. She is desperate for an identity, a sense of worth, a feeling of belonging to a family, a group or a person who really cares about her. When she fails to find that after years of trying to do the right thing by and for others, to ultimately fit in somewhere and be loved, her world falls apart. Readers feel her pain, her sense of rejection and disappointment so acutely, there is no criticism, just sadness. Though the storyline is very different, what I felt after reading this novel was similar to what I took away from the true-story movie Monster with Charlize Theron.

The Woman in Me is also a sobering look at the sexual inequality so many women encounter, especially in both the military and police forces, where “having your brother’s back” too often takes precedence over doing what is right. Granted, this story takes place a couple of decades back and one would hope it’s not as bad being a female cop today as it was then, but I wouldn’t bank on it. Francine Rodriquez captures that inequality in unforgettable detail that leaves you thinking about what you have just read for days after. There is just enough description and realistic dialogue to establish the mood, the settings, and believable characters. Despite the fairly large amount of introspective reflection on the part of the protagonist, which authenticates her motivations and actions, The Woman in Me never bogs the reader down.