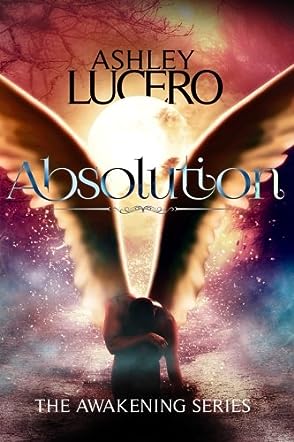 Absolution is the first book in The Awakening series written by Ashley Lucero. Seventeen-year-old Alex Constance is running late for school. While she thinks her day is bad, she is oblivious to Nathaniel’s bad day which trumps hers, after his angel wings are reduced to smoldering ash while trying to protect her. Alex’s parents are divorcing, her brother, Derek, has joined the Marines, and the stress is overwhelming for her. During a massage on her neck and shoulders, Alex falls asleep and sees a strange figure in her dream. After she wakes, the same man from Alex’s dream is standing down the hall, staring at her, but he is visible only to her. When he appears in her home, Alex quickly wonders if she has gone insane. The urge to escape and her curiosity play a tug-of-war. When she tries to escape, Nathaniel is furious and goes after her, making a deal that if she helps him get back his wings, he will leave her alone forever. Alex accepts the deal, but soon starts to regret it when she realizes that there are some majorly evil forces in play and Nathaniel is the only one who can protect her. She also finds herself falling for Nathaniel, and is faced with a tough decision.

From the very first page, Ashley Lucero had me hooked on this masterful series. The war between archangels and fallen angels is ages old, but this particular twist on the tale gave it a whole new edge. Nicely paced and beautifully written, Absolution had me catapulting between excitement, horror and intrigue, wondering whose side Nathaniel is truly on. His angry outbursts had me on edge at times, fearing for Alex, while other times I found myself giggling at their interactions. I recommend this book to readers over the age of 15, who enjoy suspense, action, adventure, and romance with a supernatural flavor.