Flash Fiction Stories of the Sea 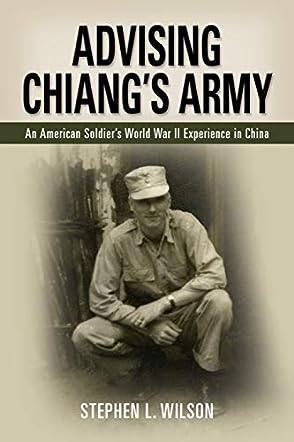 Stephen L. Wilson is an award-winning author and adjunct professor in the History and Political Science Department at Concordia University-St. Paul. In 2013, he retired from a 35-year law career. During that time, he worked for three different law firms and spent five years with the U. S. Agency for International Development's Office of the General Counsel in Washington, D. C.

He has been married to Kristine since 1977, and they have three children: Matthew, Todd, and Sarah. His interests include traveling, hiking, fishing, getting together with family and friends, reading nonfiction, and listening to music and public radio.

Advising Chiang's Army: An American Soldier's World War II Experience in China by Stephen L. Wilson gives us a different view of World War II and China at that time. We all know what happened to China and the innocent people living there, but we don’t get to see the soldiers’ perspective that often. This book gives us a glimpse behind the curtain and tells us what happened to the Chinese soldiers in WW II. Phil Saunders was a second lieutenant in the U.S. Army in 1942; he was assigned the duty of combat liaison with Chiang Kai-shek's nationalist army in China.

Soon after he arrived, he discovered that the Chinese soldiers were not prepared for the war. Half starved, ill prepared and underpaid, these soldiers were not equipped to fight in any war. He trained them to be an army to be reckoned with. He made them stronger, sharper, and gave them the boost they needed to protect their country and their people.

I don’t have to tell you much about what he did for that army. You would have to read the book to find out. I appreciated the way the writer portrayed the Chinese army. It almost reduced me to tears. And I liked Phil Saunders very much. He was kind, gentle, and firm when needed. He was almost like a father figure to these men. The highs and lows of this book were perfectly balanced and I appreciated that Wilson did not try to sugar coat anything at all. This is a fantastic book; it is amazing.