After the Thirty Days 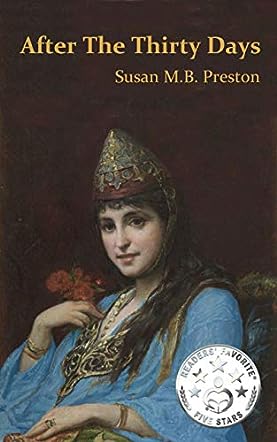 Living in Western Australia, Susan M B Preston uses her middle initials because there is at least one other author called Susan Preston.
This novella came to be because it is an untold 'side story' to the Apostle John Series. It is the first of three related novellas told from the Jewish 'Old Simon's' family members. All are standalone but related.

After the Thirty Days is a novella in the Christian historical fiction genre. Written by Susan M.B. Preston, the novella is a companion to the Apostle John Series, which explores the trials and tribulations of Christian life during the first century AD. In this novella, we follow Esther, who has been called back to Ephesus to be married, but there seems to be a great deal of confusion as to whom she will wed. The real story focuses on her reaction to her mother, who has begun to practice Christianity in her absence, and how this affects Esther’s choices about her husband-to-be. The novella runs parallel to Hell Shall Not Prevail, the final book in the series, and fills in more details about Esther’s life for the readership.

Not having read the rest of the series, I can’t comment on the contribution that Esther’s story makes to the overall series, but After the Thirty Days is an intriguing and well-penned novella in itself. I was fascinated to discover the ways of the early Christians and how their shift to the new faith was received by different cultures of the time. Esther’s dilemma really exemplifies how cruel human beings can be to one another, and I felt the Christian lessons, which were woven into the plot, were done without being too pushy or preachy about it. Even for myself as a non-religious person, Susan M.B. Preston drew me in with her sense of hope and faith, and the craft of bringing authentic and relatable characters to life.