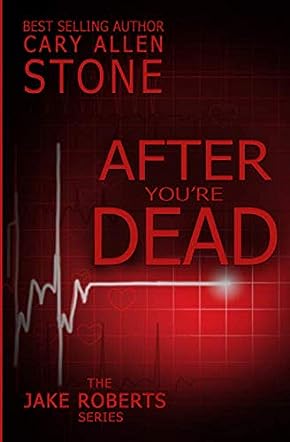 Cary Allen Stone had a successful career as a corporate and airline pilot. He flew director Ridley Scott on location scouts. He’s been a magazine photographer. His company, Miccar Magic, developed and created professional stage illusions. He performed stage and street magic and performed televised comedy-magic at the Gran Noche de Magic in Bogota, Colombia. He is an actor, voice actor, comic, producer, and filmmaker. His podcast is MURDER I WROTE, and he has a YouTube channel. He is an award-winning, bestselling author of crime and science fiction, and true crime.

After You're Dead: A Jake Roberts Novel, Book 5 is a serial killer thriller novel written by Cary Allen Stone. While this is the fifth book in the series, the author gives enough background information for this novel to be read on its own. Jake is back home and ready to enjoy a meal out with his staff and friends when Pablo, a longtime friend, appears desperate for his help. Pablo runs the MexiKings, a gang with properties in the United States that assists illegal aliens with their assimilation into the United States. Jake and Pablo had fought the Taliban together, and Jake would do anything to help Pablo get his wife, Alana, back from El Mencho, who had kidnapped her in an attempt to force Pablo to use his MexiKings for his illegal drugs business in the US. El Mencho, a brutal and despotic man, has a new ally in his campaign of terror. Richard Graham, a sociopathic serial killer who cannibalizes his victims, has escaped from Broadmoor, left his native England behind, and joined forces with El Mencho. Will Jake and Pablo succeed in freeing Alana before she becomes Richard's next victim?

Cary Allen Stone's serial killer thriller novel, After You're Dead: A Jake Roberts Novel, Book 5 is an exciting, action-packed story that pits the iconic Jake Roberts against a Mexican drug lord and a sadistic, cannibal escapee from Broadmoor, a high-security forensic hospital in England. This is the first of the Jake Roberts Novels that I've read, but I found myself quickly brought up to date on what happened earlier in the series. That said, I would suggest thriller fans read the books in the series in order. The author puts a lot into the interpersonal relationships between Jake and the people who comprise his extended family, and that bonding is an important aspect of these books. Fans of Thomas Harris' unforgettable Hannibal Lecter will be, most likely, as intrigued by Richard Graham as I was. Stone's story is fast-paced and filled with twists and turns that keep the suspense mounting. After You're Dead: A Jake Roberts Novel, Book 5 is recommended for fans of thriller and serial killer novels.