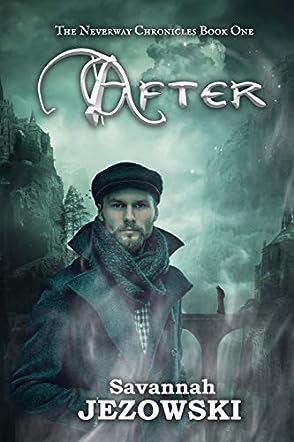 Savannah Jezowski lives in a drafty farmhouse in Amish country with her Knight in Shining Armor, a wee warrior princess, and two English Springer Spaniels. She is the author of When Ravens Fall and The Neverway Chronicles. Her work has been published in Ray Gun Revival, Mindflights and in the student publication of Fountains at Pensacola Christian College. She is also a featured author in Five Enchanted Roses from Rooglewood Press and Mythical Doorways, a Fellowship of Fantasy Anthology. She likes books, faeries, writing hats and having tea with her imaginary friends.

Savannah Jezowski’s After: Neverway Chronicles Volume 1 tells the dark story of Conrad Ellis the Third or Eli, a spook, whose nightly job is not only to escort notable visitors in and out of the ancient city of Pandorum but also to herd creepers, the restless dead, to beyond the city’s boundaries called Neverway. Pandorum itself is a city of levels accessible only through guarded gates. Ruling with an iron hand, the emperor resides in the upper city, the citadel, forbidden to anyone not carrying a “marker”, the nearly unobtainable pass. Along with his half-brother, Ivan, Eli works diligently to support his family while keeping a secret that threatens his very life. Then, one night, he stumbles upon the first victim of a murderer whose bloody deeds pull Eli into a mystery of dangerous intrigue leading to the forbidden citadel.

Savannah Jezowski’s After is a deliciously creepy book, written from the first-person point of view of Eli, the main character. Some of its popular elements include the zombie-like dead, mainly to be pitied, who have succumbed to an incurable, endemic plague that strikes without warning but is an accepted part of daily life. While this is a mix of fantasy, science fiction, dystopia, and a dash of Christian cautionary tale, the book’s characters would be right at home on the pages of Charles Dickens’ works, and that is one of its chief appeals. Jezowski’s writing style is straightforward and very readable, and she is never guilty of overwhelming us with background information. So, for an entertaining and thoughtful read, After comes highly recommended!

Conrad Ellis the Third, or Eli as he was known, was a spook. Spooks assisted the Royal Guard by turning the creepers loose in the Neverway and keeping them outside the city. But Eli had an uncanny sense when it came to them; he could smell them, sense them coming long before anyone else could. He was happy to earn his keep and support his stepfather and brothers. He had long given up hope of his twin, Roman, obtaining a marker for any of them so they could live a better life deeper in the city. Eli had enough on his plate with supporting the family and hiding the fact that he was afflicted, but when the same brother who had abandoned them came calling for a favour, he knew he was in trouble. Roman was on assignment, but a new injury left him unable to see it through. Failure would mean more than loss of status for Roman; it could cost him his life. How could Eli refuse? But with the hand he had already been dealt, perhaps he should think twice before accepting his brother's burden too.

After is the first book in Savannah Jezowski's The Neverway Chronicles series. Within this gripping tale you will find pages of rich and vivid descriptions, and wonderful scene setting. You really start to get a feel for the city and the Neverway, a place filled with creepers who were once the loved ones of those within the city. The characters are not only well developed as individuals, but their relationships have been given due thought and attention, making it a real pleasure to read as you get to know about the characters, with small aspects and history revealed through such interactions. There is a very fleshed out feel to the world, and it is a growth I expect will continue in subsequent books. Pick this up if you want to lose yourself in a heart-wrenching tale where things seem to progress from bad to worse, but where glimmers of hope can sometimes lighten the darkness.

After by Savannah Jezowski is a character-driven story about a close-knit family’s struggle to stay together and survive in a dark world full of good and bad magical forces. The central character is Conrad, a troubled soul with a strong moral compass. He is the natural leader in a family of four boys and a useless step-father. Through a chain of events, Conrad becomes the protector of a young princess who is being hunted by a ruthless assassin. His youngest brother, Victor, is kidnapped and held in exchange for the princess. In an effort to save both Victor and the princess, Conrad and a colorful cast of characters set out on a journey that will challenge them all in more ways than one.

After is the first book in a series called Neverway Chronicles. It sets the stage for stories to come by establishing the setting and characters. Savannah Jezowski’s strength as a writer is in painting vibrant pictures for her readers through her words. She has created a dark grimy world for her series to exist in that is easy to visualize thanks to her vivid descriptions. Her characters are fleshed out thoroughly with strengths, flaws, and idiosyncrasies. This book was classified as Christian fantasy/sci-fi and she did a good job of writing so that the story will appeal to both Christians and non-Christians. There are Christian concepts hidden within the themes of the book, but they are so well cloaked that it would be easy to miss them unless one was looking for them. I recommend After for anyone who enjoys a good fantasy with strong characters. There is magic at play and zombie-like creatures called Creepers, but all of the supernatural elements are downplayed. They are always around but never given the spotlight. In Ms. Jezowski’s world, the spotlight is reserved for her strong cast of characters.

Fantasy is not normally a genre I go for, and zombie stories even less, but I've always had a soft spot when it comes to stories about brothers. So it was with a mixture of hope and doubt that I picked up this novel by Savannah Jezowski. I'd seen some glowing reviews about it on several websites and was curious to find out if it would live up to all the enthusiastic things other readers were saying about it.

All I can say is -- WOW! It went over and beyond my expectations. From the very first page, Jezowski yanked me by the arm and pulled me straight into the gloomy, foreboding Neverway, where she introduced me to the two main characters, twenty-five year old Conrad Ellis the Third and his seventeen year old stepbrother Ivan Jenks, both of whom would soon steal my heart. The brothers are "spooks", whose job it is to escort "creepers" (the roaming dead) out of the city walls and into the wilderness beyond. That alone could make a compelling, and somewhat chilling, story, but the author doesn't stop there. In fact, the creepers aren't even the main focus of the plot. They linger almost in the background, like a silent threat to keep you on edge through the rest of the enthralling tale.

I admit the first few chapters were a little slow, as the author built her fantasy world and established the characters, but even with a slower pace it held my interest on every page. Once the plot really got going, it was very difficult to put down and kept me up reading into the wee hours for several nights in a row. The last quarter of the book is absolutely un-put-downable. Most of the story is told by Conrad, as he and Ivan are pulled into a life-and-death search for their kidnapped youngest brother Victor. The author has added a fantastic and realistic cast of supporting characters, including Conrad's identical twin Roman and his wife, a disguised princess fleeing for her life, her gentle guardian, a holy healer, a lovable soldier towards the end, and, of course, villains that will make your blood run cold. Their desperate journey to find and rescue Victor, while at the same time keeping the young princess safe, is the main plot, but in a certain sense, the more heartrending conflict is Conrad facing his own inner demons and his relationship with Ivan. More than once I found myself reaching for the tissue box, and the end -- oh my goodness! The end left me with so many mixed emotions, a handful of soppy kleenex, and a new author to add to my list of favorites.