Alfie Knight and the Geek Legends 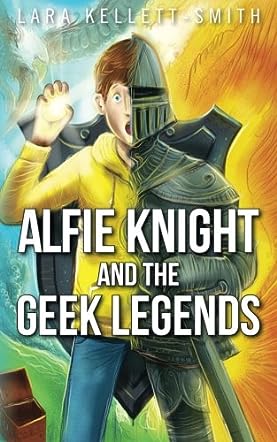 A school visit to the museum is fun, but nothing unusual, right? That’s what Alfie Knight would have thought before he stumbled upon a mysterious cube in an exhibit room which doesn’t actually exist. The next thing Alfie knows, he’s clanking around in a full suit of armor every time he says his name, he’s got hostile guards and suspicious teachers tracking his moves, and his bullies have seen him in full Rapunzel regalia in the girls’ bathroom. Doesn’t matter what his friend Tom says, being special is really more trouble than it’s worth! But things aren’t as bad as Alfie thinks. He was, after all, chosen for a reason. With a little bit of ingenuity, a hefty dose of bravery and a warm heart, Alfie might just be able to catch the villains, save his friends, and be a hero in Lara Kellett-Smith’s exciting novel, Alfie Knight and the Geek Legends.

Kellett-Smith has done a superb job of crafting out a story with a fun plot, engaging humor, and most importantly, amazingly endearing characters. The main protagonist, Alfie, thinks of himself as just another normal kid, but don’t let his humility fool you for a minute. Throughout the story, I am struck by just how genuinely nice he is; his wry narration and innocent candor is truly refreshing. The side characters, too, are really entertaining in all their quirkiness. I laughed every time Alfie’s eccentric parents appeared, and only wish that we could have seen them more. I also enjoyed Alfie’s close friendship with his best friend, Tom, and all the colorful details of their lives outside of their magical adventure. The mundane high school reality of secret crushes, overprotective parents and bullying woes intertwine with the fantastical elements of mysterious powers and dramatic criminals to make Alfie Knight and the Geek Legends a marvelous read for adults and children alike. I definitely recommend it, and would love to see a sequel.