All Is Not LOST 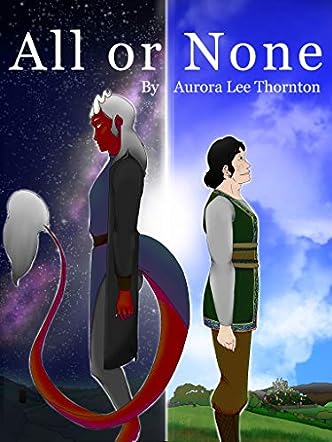 Aurora is a nonbinary, asexual writer with a new goal in life: to write the queerest books possible. (And yes, xe means gay, but also weird is good too.)

All or None is the first book of the Star Stories series, written by Aurora Lee Thornton. Royiora is an abandoned, cursed child found by the healer Phalianeon and the battlemage Korila who were passing by. It does not take long for the two adults to confirm that Royiora is not cursed. The boy is a rare, powerful mage who has yet to master control of his powers. Instead of sending him to the Academy to be taught, the two decide to take him in as their own and entrust the boy’s magic learning to their most trusted allies. Meanwhile, in Domain, the authoritarian empire, Healvithi with the power to nullify magic are being trained to be soldiers for the Trinity. Healvithi are individuals with horns and tails. To them, people outside their empire are nothing more than barbarians. Kalo is a special Healvithi Null who can absorb all kinds of magic. He is placed in a dormitory with other talented individuals like him. School starts out fun: he learns new things, meets new people, forms a bond with someone… but the talent of their special Null group is undeniable and it hastens their training. Kalo soon finds that being a powerful Null comes with a price and it was a price he never wanted to pay in the first place.

Aurora Lee Thornton has created an extraordinary fantasy world with All or None. It is a fearless piece of work that breaks stereotypes and exceeds expectations. Thornton delivers a unique setting and a plot that hooks attention from the very first chapter. The book contains captivating characters, each with their own stories and hardships that pull at the heartstrings. As I learned their stories, I got emotionally attached to the main characters and their friends. Even Hult, whom I initially found to be a spoiled brat, grew on me. Kalo and the rest of the special Nulls really went through a lot. I shed tears for all the torment they went through while they were still in school, especially when Kalo was finally allowed to visit home and he felt out of place, unable to tell anyone what was happening to him. During the first half of the book I was eagerly anticipating the meeting between Kalo and Roy. After getting to know them individually, I could tell that together they would be something special, something amazing. However, the path to being together is not easy. Mistakes are made but second chances are given too, not to make things right, but to prove that one day, the person who made the mistake could do better. Kalo and Roy both experience loss, pain, and uncertainty but I found that the challenges these two face along the way are just one of the many things that make this story great.