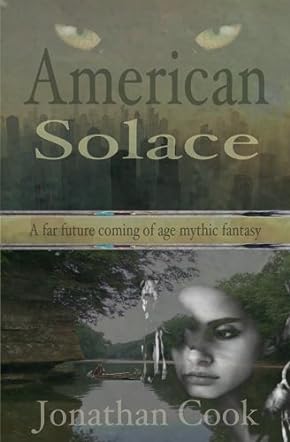 Jonathan is a native of southern Indiana, tracing his Hoosier heritage back eight generations. A life-long passion for primary cultures, wild ethics, and visions of first American ancestors are the source of Jonathan's interest in Myaamia culture. He is an author and a landscape painter. Whenever he can, he enjoys packing up the paints and hitting the trail, where he can learn exactly how nature composes the scene.

American Solace: An Awakening, a Far Future Coming of Age Mythic Fantasy by Jonathan Cook tells the story of Little Owl's journey to find his true totem, the guide for his life. His uncle fears he will receive a war totem if he follows through with the Rite of Passage, and Little Owl will be sent off to battle long time southern enemies. Instead, his uncle suggests he go on a vision quest: an ancient ritual likely more dangerous than the Rite of Passage. Little Owl buckles under pressure and enters the Rite of Passage for fear of humiliation. He rejects the totem given to him, and prepares himself to set out on his vision quest. He has secret plans and reasons of his own for going. He faces impossible odds and intense dangers, but reconnects with his old friend, the War Chief's daughter Willow. What he learns is important to saving his people, and it unveils part of the mystery of how they entered the present from the end of the last age.

Jonathan Cook brings to life a world that teeters on the brink of familiar, and I could believe it was real. Little Owl and Willow were most likable and I enjoyed getting to know them through their struggles, failures, and triumphs. The story had moments of intense action, life threatening conflicts, and it included vivid, thought provoking descriptions. I saw things through the eyes of Little Owl, and figured them out as he did. Willow's fierce loyalty to Little Owl and her bravery and skill as a warrior made her a commendable lead female. I appreciated the sweet simplicity of their falling in love. The fate of Little Owl's people has only just begun to be revealed. Mystery lingers and after reading American Solace: An Awakening, a Far Future Coming of Age Mythic Fantasy, I look forward to finding out what happens next.