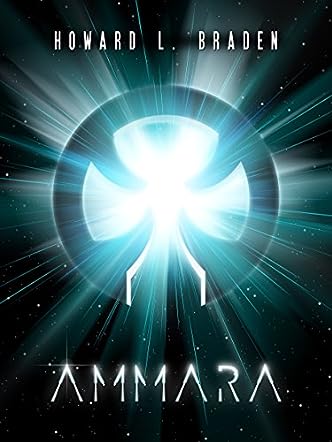 Howard L. Braden belongs to a strange species. Going through a near-death experience in his adolescence, the Hungarian author was forced to think outside the box forever.

He did not talk about the experience for years, he just kept working silently. In 2011, he finally decided to speak out: in the form of a spiritual adventure novel.

His voluntary mission is to pass this legacy on to his readers: his thoughts about life, the human being, the force and something far beyond.

(Note that: Review Exchange is not possible due language barriers. Book Donation is still possible in e-book only but requests can be processed later.)

The first in a trilogy series, Ammara: The Awakening by Howard L. Braden unravels inside a mysterious cave known as the tunnel of hell in Tongaat, South Africa, where three archaeologists found a mirror smooth imprint on a rock. Years later, this cave will solve some personal and academic questions for Professor Robert Lance, an astrophysicist whose astounding discoveries will usher in the era of the second Space Age in the United States of America. When his wife Jenny Lance dies in a car accident, Robert finds himself without a real purpose in life. That is until he is recruited by the US Air Force and tasked to head a space program in a secret base in Nevada. What follows is an amazing story that will challenge the origins of humankind as we know it.

Ammara: The Awakening is an action filled novel. This is the kind of book that will leave its readers breathless right from the beginning until the very end. Its characters inhabit the intriguing world of science and astrophysics and may sometimes seem to speak in a different language, but the author is able to make them as ordinary as you and me. These are characters that move in a different world and are extremely intelligent, but they feel love, joy, sorrow and sadness, just like any human being so that it is not difficult to empathize with them. Mr. Braden is quite convincing in presenting a theory that will put a big question mark on accepted norms as to where we come from. This novel should make its readers ponder on the future of humankind too. I highly recommend this book!

Ammara: The Awakening by Howard L. Braden is a novel of the future. Professor Robert Lance leads a happy life until his wife Jenny is killed in a car accident. After that, he goes through the motions of living until one day he is called on by the US Air Force at the college where he teaches. After signing a confidentiality paper, he is taken to Area 51 where his life takes a startling turn and he embarks on a journey he will never forget; a journey to unravel the last mystery left to mankind. What happens in the beginning is the key to the end, a key that is about to turn the world on its axis and leave us wondering who we are and even, perhaps, where we are.

Ammara: The Awakening by Howard L. Braden was interesting, to say the least. I believe it is the first of a trilogy and, although a long book, was packed with action and adventure right from the very first chapter. It was one of those books that never let up, never went stale, and never left me feeling as though something was missing. This is an extremely well developed book, with a really good background and well-written characters, the type that you can identify with. I was a little confused with how the first chapter fitted in as it seemed to have no bearing on the story, but it all became clear as everything melded together in one amazing, hard to put down tale. Looking forward to the next one!

Ammara: The Awakening by Howard L. Braden is a book that asks you to join in an uplifting adventure. Professor Robert Lance takes you on the biggest adventure that anyone can have and then turns the world upside down on its head. This first book in a deeply thought out trilogy will make you ask questions such as “Who am I? Why am I here?” and then gives you the chance to change yourself. If you are ready to take part in the mystery and the adventure, it is time to give in to Ammara and discover the legend of ascension.

This has to be the singularly most unique adventure that I have ever read. There is still a lot about this book that I have come away not fully understanding. However, it is that which makes me want to read it again and which makes me find it an intriguing read. The story is a grand adventure and it truly does make you ask yourself a lot of questions, and it can shake your beliefs whether you are deeply into the evolutionist theory or deeply religious - both view points are rocked a bit. Author Howard L. Braden most certainly reaches deep within some experience to put pen to paper and tell us a story that is both profound and entertaining. If you are ready to take an adventure and ready to give up some of your hard beliefs in what an adventure book should be, this is going to be the read for you. This book will uplift you and make you think while it does. It is truly one of those books that people will want to talk about just to see what everyone else took away from it.

Ammara: The Awakening is a metaphysical adventure story written by Howard L. Braden. Robert Lance, a professor of astrophysics, was woken up late one morning by his wife, who wanted to let him get a bit of extra rest. As he rushed to his lecture, he had no idea that he had seen his wife alive and happy for the last time that morning. After his lecture, he was notified by the police that she had been involved in an accident and had not survived. Four years later, he wakes up late on his own and rushes off to Princeton. During class, he's visited by Air Force officials who have come to ask for his assistance. Curious, he agrees to sign a confidentiality agreement and accompany them to Area 51 in Nevada.

Howard L. Braden's adventure story, Ammara: The Awakening, presents the reader with an intriguing blend of hard science fiction and metaphysics. I enjoyed the discussions Lance has with the Air Force researchers and loved his design plans for the next stage in space technology. The hidden conspiracy fan in me also thought that setting the story in Area 51 was a stroke of genius. However, there's a lot more going on than astrophysics in this thoughtful and well-presented story. Braden offers the reader a wide range of concepts to think about, including evolution, climate change, and the presence of alien sleepers called 'The Borrowed Ones' in society. While my major interest in this story revolved around the technology and hard science fiction aspects, which are marvelous and profoundly interesting, Ammara: The Awakening is an imaginative and thought-provoking story that will appeal to a broad base of adventure and science fiction readers.

Ammara by Howard L. Braden is an uplifting and thought provoking book that will make readers ponder, contemplate and reflect on the mysteries of mankind. It's a book that will make readers ask questions about the evolution and origins of mankind, and look at life philosophically. Professor Robert Lance's life takes a turn when he loses his wife, Jenny, in an accident. He starts living again when he joins the US Air Force and is taken to Area 51. There he embarks on a unique journey and finds himself asking questions that have ambiguous answers. He tries to find clear answers to the questions that have been dogging mankind for a long time. Readers will be convinced by his views as they join with him on his mission to discover more about humanity. Will Professor Robert Lance succeed in his mission?

This compelling book is profound and the author's intuitive mind takes readers to another realm where they actually think about their origins and existence. The book makes one curious to find out more about humanity and life. Though the story is adventurous with some intrigue, readers can understand the profundity of thoughts expressed if they delve deeper into the plot. The story is very entertaining, engaging and different, and the characters are well sketched in a way that they complement the plot and the background nicely. The plot is well developed and it might question a lot of our individual thoughts and beliefs.