An Elephant Ate My Arm 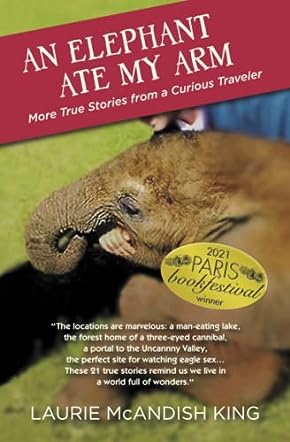 Laurie McAndish King writes about 20-foot-long Australian earthworms, being rescued from a kidnapper in Tunisia, and an Ivy League astrophysicist’s explanation of how flying saucers are powered—not your typical travel writing. Her stories—poignant, insightful and often quite funny—are always inspiring and entertaining.

King’s award-winning essays and photography have appeared in Smithsonian magazine, the San Francisco Chronicle, Travelers’ Tales’ The Best Women’s Travel Writing, Lonely Planet’s The Kindness of Strangers, and other magazines and literary anthologies.

The twenty-one true stories in her latest volume, An Elephant Ate My Arm: True Stories from a Curious Traveler, remind us we live in a world filled with wonders, transporting readers to marvelous, faraway places including:

• A man-eating lake on a Caribbean island
• The forest home of a three-eyed cannibal
• The world’s very first labyrinth, home to the Minotaur
• A portal—in the heart of San Francisco—to the Uncanny Valley
• The perfect site for watching eagle sex
• And many more …

A recent Readers’ Favorite review sums it up: King writes with wit, self-effacement, a moral eye, a mastery of description, a joy of living, and a devotion to earth’s majesty.

An Elephant Ate My Arm: More True Stories from a Curious Traveler by Laurie McAndish King is a compilation of 21 stories from all over the globe, divided into sections titled The Flavors of Love; Eyes, Wings and Tongues; Body Works; Into the Kaleidoscope; and Transformation. Each entry is indicative of Ms. King’s predominant characteristic: curiosity. If she hears of an oddity or of something that may be interesting, she needs to experience it. The ancient fat lady statuary of Malta, for instance, or the magnificent butterflies of Costa Rica, or the organic recipes of Cuba. She even explored a museum in Oxford, England, known for the weirdness of its displays. So, suppose you share this trait of inquisitiveness. In that case, there is much to be enjoyed in this volume of travel stories, which includes many corresponding photographs.

I have several favorite moments from this work, such as how King confesses her failure to make olive oil soap in Crete, producing something brown and lumpy (like something we won’t mention here). And as a fellow birder, I was with her every step of the way in the mountains of Trinidad as she thrilled at the sight of Lophornis ornatus (a bumblebee-sized hummingbird known as the tufted coquette). So too, as she experienced the sight of hundreds of bald eagles in northern California. I was with her also in her love of local history, which she probes in every story, including the post-revolutionary statuary in Moscow’s Park of the Fallen Heroes, with Josef Stalin’s nose bashed in, which leads her to the recent question about our own Confederacy monuments: “Who writes history?” However, my ultimate favorite is her declining to climb Australia’s iconic Uluru out of respect for ancient tradition and, instead, giving us a tour of flora and fauna at the mountain’s base. King writes with wit, self-effacement, a moral eye, a mastery of description, a joy of living, and a devotion to earth’s majesty. If you, too, have a sense of curiosity, you must explore An Elephant Ate My Arm by Laurie McAndish King.