Sutra of the Pearl 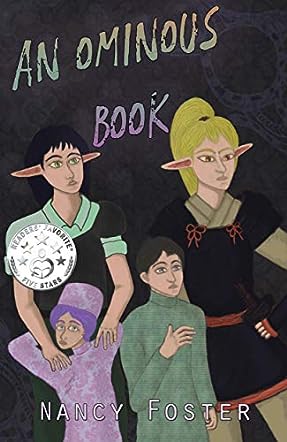 An Ominous Book started as a hobby mainly to curb my boredom of the conundrum of daily life. The initial scene that became the foundation of the story is the ending of the first book and the huge train of consequences that ensues. I didn't write the books in order but I'm weird in several ways. I love to travel to strange places and visit military museums. Yes, that is Gael García Bernal posing next to me and one of my books.

An Ominous Book by Nancy Foster is the first book in the young adult epic fantasy series titled An Ominous Book Series. This is a book and series that would appeal most to an audience made up of primarily young adults who enjoy fantasy fiction with elves, and who do not mind a bit of violence and mild swearing. Lord Spaulding had the absolutely perfect life as an elusive mortal elf who ruled the Kasimma Clan, but his life was quickly turned to chaos when his best friend, Trevilin, delivered two orphaned children to him that were his blood relatives. Richard and Nelida Earlrose's appearance on Lord Spaulding’s doorstep drive him to go on a quest to deliver the two human children back to their kind. Will Lord Spaulding succeed in returning the children or will dangerous magic waylay his mission?

An Ominous Book by Nancy Foster has a cute cover that showed four of the main characters. I personally liked the fact that the cover was kept simple as it allowed me to gain a clear picture of the characters without being distracted by too many visual elements. The story line itself was well chosen and it reminded me a bit of The Hobbit with how both Bilbo and Lord Spaulding end up pulled into a quest based on the contents of their doorstep. I found myself greatly enjoying Lord Spaulding's character, especially in relation to how he interacted with the two children. Overall, I greatly enjoyed reading this book and I am excited for the sequel!