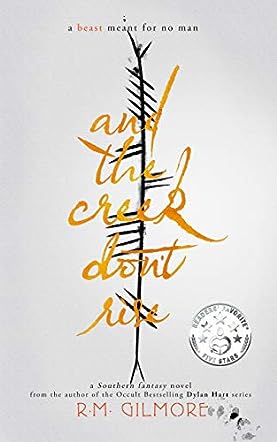 While drinking at the lake under the light of the full moon, a young couple unexpectedly becomes unwilling participants in a terrifying ritual with grisly effects that forever alter the course of their lives in the horrifying paranormal novel, And The Creek Don't Rise by R. M. Gilmore. On her twentieth birthday, Lynnie Russell's best friend Hattie, brother Garret, and his best friend Rusty take her out to the local bar for a good time. Later, under the influence of alcohol, Lynnie and Rusty drive to the lake to swim and drink some more. While swimming, they hear women murmuring nearby. Curious as to why they were at the lake so late, Lynnie and Rusty follow the sound of their voices. Peering through the bushes, they are shocked to witness a circle of what looks like witches performing a ceremony. Before they can quietly make their escape, Lynnie is taken captive, and all hell breaks loose. The next morning, Lynnie wakes up covered in blood, and everyone around her is dead. Why did this happen to her? And why is she the only one left alive?

And The Creek Don't Rise by R. M. Gilmore, is a chilling paranormal story based on the fabled monster, the Arkansas Howler. It is a thrilling novel where aspects of ancient Irish legends and myths meld together with the legendary cryptid. These intriguing elements create a spellbinding story that is unique and original. Cleverly written, it is a haunting, spine-tingling story that sparks the imagination and provokes nightmares. For those who love a shiver-inducing tale, this is a fabulous paranormal novel that makes the hardiest reader's blood run cold. However, due to some strong language, sexual situations, and filled with blood, guts, and gore, this story is more suitable for mature readers.