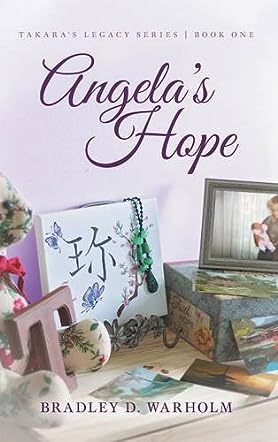 Angela’s Hope by Bradley D Warholm is a compelling story of faith. Angela Boisclair is a meek and gentle young woman. Yet, Angela is very strong in her devotion to the Lord and her service in the church. While attending university in Calgary, Canada, she meets Jonathan Hansen; they court and soon wed. Everything is wonderful until life throws the newlyweds a curve ball, and soon everything changes. Angela begins to wonder if Jonathan has a genuine relationship with Christ. Angela and Jonathan are challenged in their relationship, their faith, and in their future together. They put their life in Calgary and their aspirations on hold and move to Japan. Jonathan is excited to teach such focused students, but Angela feels alone and out of place. The culture, customs, and food were going to take getting used to. Over time, the couple settles in and Angela makes friends within a small Christian church. When Angela becomes ill, the couple’s faith and resolve are put to the test once more. However, a precious treasure resides within these new found friendships. One serendipitous friendship changes the course of Angela’s life, giving her hope and a future.

Bradley D Warholm composes a dramatic story of family and devotion in Angela’s Hope. The 1980s Western normality is thrust into the devoutly stoic, almost antiquated culture of Japan. Warholm vividly illustrates the diversity of his settings, and the societal differences facing his characters. The narrative is a collision of two distinct worlds, depicting the lives of two very different women, set apart by custom and tradition. The story begins with the end, then retraces the events that lead up to the hopeful, yet somber conclusion. As the story unfolds, several years pass by, allowing the characters' personalities to grow and arc. Youthfulness transcends into maturity. Innocence and purity are challenged by harsh and unexpected realities. Family devotion is ripped apart by tradition and patriarchal rule. Faith is tested by unforeseen tragedy. Hope is discovered in unimaginable ways, proving God does hold the whole world in His hands, while caring for each of us individually. As mentioned before, the story ends happily, but with cautious foreboding, an air of uncertainty lingers. The reader is left wondering if Angela’s dream really will come true.