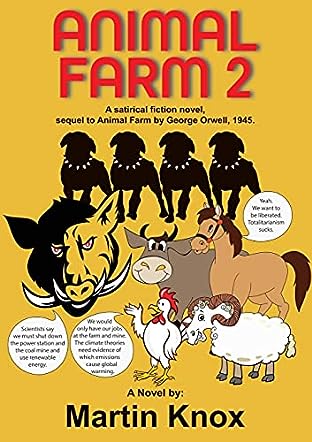 Fans of Animal Farm by George Orwell will adore Martin Knox’s Animal Farm 2, a fable with strong hints of political satire set on a farm on tropical Caruba, an island in the grip of the Social Republic. It is set within a cold war between the Social Republic and the Democratic Union. After successfully leading an animal revolution, the pigs take over control of the farm and put the animal workers under unacceptable and harsh working conditions. When coal is discovered on the farm, it attracts the attention of the superpowers who are in it for their own interests. The animals find themselves embroiled in a war of climate change, where they have to decide to shut down the power station and the coal mine or use renewable energy. But the consequences will be dire for the animals including the loss of jobs. So, the only option they have is to fight for their freedom from totalitarianism. But can they win?

This is a cleverly plotted story with interesting characters, and readers will relate to the animals that behave like humans; the anthropomorphism is brilliantly executed. Readers will encounter animals such as pigs (Lords Napoleon, Natalia), cattle (Tosser, Earl, Henry, Arnold), sheep (Sharon, Trudy, Sophie, and others), goats, llamas, horses, donkeys, mules, and more. Animal Farm 2 is open to several interpretations with political manipulation, abuse of power, superpower interests, and those who bear the brunt of political maneuvering. It is a fable, but it is the same story that we see being played out too often in the political world. The novel features relevant and deftly written political themes, a debate on climate change, and the effects of totalitarianism. The characters are elaborately written and readers can see in them a portrait of what politicians do. The satire is biting, ingenious, and written in a context that readers can relate to. Martin Knox’s satirical novel is a work of great imagination.