In Memory of Michelle 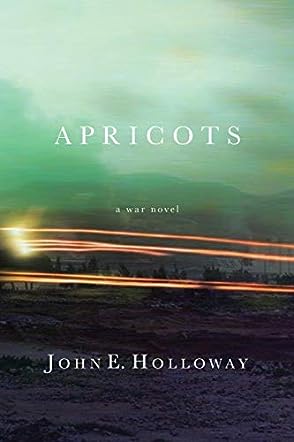 Apricots: A War Novel by John E. Holloway is a historically rooted and exquisitely written account from a Marine Lieutenant’s perspective. It conveys his experiences in Grenada and Beirut, Lebanon. Each chapter is headed by direct quotes from the New York Times, the Washington Post, Life magazine, and others. Though the novel is not a first-person piece, it feels like it because the point of view seldom leaves the protagonist, Lt. Robert Forrest, as he graduates from Virginia Military Institute with the refrain, “You will get shot at. You will return fire.” Then we are with him in his training as a platoon leader of a squadron of nautical-invasion amtracs and as he muses about his life, the world, and his place in it. We experience the detour invasion of a Caribbean island en route to the Vietnam-like standoff in the Middle East. Finally, we feel the desolation, futility, and non-ending danger of cannon and sniper fire in Beirut.

I immediately became engrossed in this exciting, thoughtful, eye-opening, and heartfelt tale. In places, Apricots reads almost like poetry: “… sleet specs bounced off his helmet like dancing albino knats.” Author John E. Holloway shows us what happens in military life but also what it truly feels like. The protagonist, Lt. Robert Forrest, loves being a Marine and being alive. He notices the ocean, the sky, his fellow Marines, and he describes his roots in the Virginia mountains and the disenchanted patriotism of his Marine father. Lt. Forrest personifies the expression "esprit de corps," and he both exemplifies and demonstrates bravery, courage, and empathy. And we chuckle at the stories told in bunkers and ships about personal histories and - so unexpectedly - opera librettos. And, of course, the legendary apricots! John E. Holloway, author and always a Marine, has given us a masterpiece in reality and - dare I say it - the joy and beauty of fighting for his country.

Apricots by John E. Holloway is a fictionalized take on actual historical events in the early 80s. It follows US Marine's Second Battalion, Eighth Marines, where First Lieutenant Robert Forrest finds himself embroiled in events that left a mark on history. With Grenada's leadership in turmoil, platoon leader Forrest's battalion is deployed, where the marines carry out orders to invade the island and neutralize the People's Revolutionary Army forces. However, when they receive news of a Beirut bombing that led to the deaths of multiple marines, the 2-8's find themselves headed towards Lebanon, where the American forces join a multinational peacekeeping mission. When a guerilla war with the local militia ensues, will they make it out alive?

Author John E. Holloway's novel masterfully showcases the futility of war, where Marines quite often find their destinies taken out of their own hands. Filled with action and intrigue, Apricots is a thoroughly engaging blockbuster of a novel where the breakneck pace of the plot and the absorbing narrative never lets your attention waver for a single moment. The characters are compelling, and the realistic dialogue and setting create tension and suspense that make for many thrilling moments. Robert Forrest is a protagonist that you can't help rooting for. I also enjoyed the camaraderie and the brotherly banter between the Marines. The climax makes sense in hindsight, but it was heartbreaking nonetheless. If you enjoy reading action-packed military fiction novels, Apricots is the book for you.

Apricots is a work of fiction in the military genre. It is suitable for the general reading audience and was penned by John E. Holloway. Set in the aftermath of the 1983 bombings of the US army barracks in Beirut, the book follows a platoon of marines as they land and occupy the island of Grenada before heading to Beirut to fight back against the terrorists who killed their fellow soldiers. The story depicts the reality of living and working in a combat zone, the bonds forged between those who survive, and the nature of the sacrifice that the marines made while so far from their homes.

This book offers a fascinating perspective into the day-to-day lives of active service members, especially those operating an armored vehicle in a world that feels vaguely familiar to them but also utterly foreign. John E. Holloway demonstrates an incredible understanding of the group of people caught in the politics of their situation and surviving one day to the next by following orders and relying on each other for support. The descriptive writing used for even the most mundane and everyday aspects of life working with an armored vehicle is sublime. The smells in particular--exhaust fumes and oil mixed with the salt of ocean water--practically emanating from the page. Apricots is a vivid portrayal of a journey through dangerous fields and back-room politics. A must-read for those seeking insight into an under-depicted part of the marines’ history and fans of war stories grounded in the real world.

Yesterday's Marines have no equal in today's "join up and get tuition paid for" military. Fortunately, some of them can also write. Enjoy this rare account, largely autobiographical.