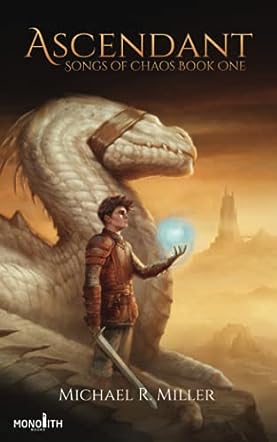 Michael grew up in the grey, wet and wild west coast of Scotland.

He began writing his debut book, The Reborn King, when he was 10. Old paper copies of terrible opening chapters may still be found in a drawer back home. Thankfully those early drafts never saw the light of day. In 2015 he renewed his writings efforts and released The Reborn King in November of that year.

Since then he has sold over 150,000 books, hit numerous Amazon bestselling charts, including the top 100 of ALL books on Amazon.com. A scene from his first book will be incorporated into the London Academy of Music & Dramatic Arts Exam Anthology for Performance starting in 2019.

He has also worked at Bloomsbury Publishing in their Digital Marketing Department and co-founded the digital publisher Portal Books. He’s also spoken on BBC Radio Scotland on Self-Publishing.

His new series, Songs of Chaos, begins a new type of dragon rider fantasy combining the best of Eragon/How To Train Your Dragon with eastern inspired magic systems of Xianxia and cultivation fantasy.

In the tradition of Christopher Paolini, Ascendant: Songs of Chaos by Michael R. Miller is a gripping fantasy tale that takes readers into a richly developed world where magic and dragons are part of a phenomenal conflict. Holt Cook is just a servant and he has faithfully served the Order Hall of the Crag. He makes a startling discovery: dragons show no pity to the weaklings of their kind, whom they kill when they are young. When he finds a defective egg, he makes up his mind to protect it. With the impending scourge and imminent war, Lord Silverstrike, the legendary rider, might not stand a chance alone. Creatures of dark magic grow in their numbers and they leave death in their wake, with dragon riders dying every day. Halt must nurture and discover the secret, magical power of his dragon, a power that might be the only hope to save his world.

Ascendant: Songs of Chaos is a beautifully written story with a plot that excites the imaginations of readers while transporting them into a world that is vividly written. The characters are sophisticated and readers will enjoy following them. Whether it is Holt, a boy who spends his time washing the dishes as a servant, or the enigmatic Soul-Cursed, the author makes sure that each of these characters has traits that set them apart while keeping them likable and realistic. The prose is superb and the plot is stunningly twisty. This novel is an epic fantasy exploding with action; it is a story with a seemingly straightforward plot but with details that elevate its beauty and set it apart from conventional stories in the genre.