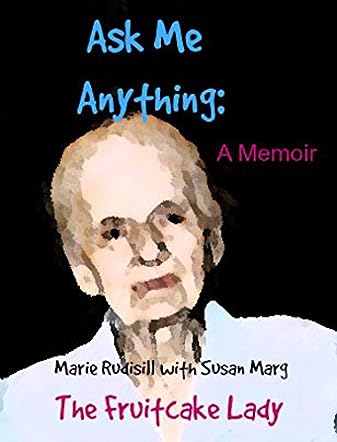 Susan Marg was used to writing alone. Then she began working with Marie Rudisill on her memoir Ask Me Anything. Best known as “The Fruitcake Lady” from her appearances on The Tonight Show with Jay Leno, Rudisill went mouth to mouth with anyone who asked her a question or sought help with a problem. She always had an answer on the tip of her tongue. Marg says, “Marie planned the course we were to follow, and I was only too pleased to go where she led. She had a fascinating life.”
Marg’s other books include Las Vegas Weddings: A Brief History, Celebrity Gossip, Everything Elvis, and the Complete Chapel Guide, published by HarperCollins and Hollywood or Bust: Movie Stars Dish on Following their Dreams, Making it Big, and Surviving in Tinseltown. Both have received awards and recognition for excellence. Her interest in the entertainment business was honed during her years spent in advertising when knowing what was hot and who was "in" came with the territory. She is from Cleveland, Ohio, and she has a Midwesterner's easy-going, friendly disposition that even fifteen years living on the East Coast and working in the telecommunications industry couldn't quell. Susan now lives in San Diego with her husband, James C. Simmons, who is also a writer/historian.
On her blog, "The More Things Change..." at susanmarg.com, Susan reflects on history, her story, true stories and fiction, considering the quirky, crazy things we once said and did compared to the quirky, crazy way we live today. She comments on gossip, too, what we talked about way back when and who captivates us currently, noting that the more things change the more they remain the same.
What Susan says about herself: I'm a writer, a reader, a television watcher, a moviegoer, a theater attendee, and a museum visitor. I believe our stories make us who we are. What are yours?

Ask Me Anything is a wonderfully delightful memoir about the life of Marie Rudisill, better known as The Fruitcake Lady. Susan Marg teamed up with Mrs. Rudisill to chronicle the events of this feisty and outspoken woman's life. Born and raised in the South during the early 1900s, Marie’s family values and roots run deep. “Being a Southerner means taking care of your family.” Marie became famous in two ways. First of all, she was the aunt of Truman Capote; secondly, she was the renowned Fruitcake Lady on The Tonight Show with Jay Leno. While on the show, the audience asked her all kinds of questions. But Beware! Marie’s motto: “Ask Me Anything, I’ll tell you what I think... If you can’t handle the answer, you shouldn't ask the question.” Marie Rudisill's memoir is bursting with real-life escapades. Ask Me Anything overflows with delicious wit and candor-filled nuggets of truth.

Marie Rudisill “tells it like it is” in her memoir, Ask Me Anything. Susan Marg co-authored this charming story, stating, “It is hard to say no to Marie.” Being a book of memories, it is written solely from the author’s point of view. Ask Me Anything captures the heart and soul of Mrs. Rudisill. Each story flows with smart humor, revealing analogies, metaphoric phrases and sensory descriptions. The diversity of characters and family members that helped shape her life and friends that accompanied Marie in her life were described with sentimental detail. Marie’s life is portrayed eloquently; each chapter is full of breath, fragrance, and tasty morsels of knowledge. This book is written realistically so that at times I felt I was sitting at a table, sipping coffee and eating pound cake, and listening to her endless tales of life in the South. As a reader, I was drawn into Marie Rudisill’s life story. After reading, Ask Me Anything, I can truly call Marie Rudisill my friend.