Some Mistakes of Darwin and a Programmer's Theory of Life What is Unique about Aussie English & Culture?
by Luke Zimmermann
Non-Fiction - Cultural
49 Pages
Reviewed on 08/18/2016 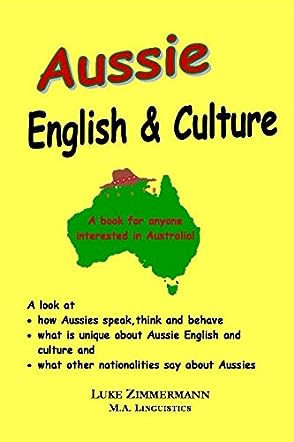 I wish I'd had Aussie English and Culture by Luke Zimmerman when my Australian husband decided to pack up our little family and move back home to Australia! I'd grown up there, but left at 11 years of age. Returning as an adult, I suffered a year of culture shock, something that Aussie English and Culture might have relieved a lot sooner if Luke Zimmerman had written it in 1984. Chances are he was suffering from culture shock himself somewhere else in the world as he's lived in several countries, but when Zimmerman immigrated to Australia with his Aussie wife, he found out he could hardly understand what Australians were saying to him. In some instances, it seems his wife didn't understand the "lingo" either. I didn't find the accents that bad or hard to decipher, but probably only because I had grown up there and had been married to an Aussie for 14 years. In fact, I found phrases like "It’s cold enough to freeze the balls off a brass monkey" highly imaginative and super funny. Nor was I surprised to hear the Aussies' favourite adjective - "bloody" - describing everything from cricket to beer.

But for those planning to visit Australia, or even more so, contemplating moving there, it would be advisable to invest in a copy of Aussie English and Culture. Read it while you're en route, so that when you start being introduced to Aussies, you don't ask what they would consider nosey questions. Unlike North Americans, Aussies keep their private lives private. And they don't like hype. I found that out the hard way, and after reading Luke Zimmerman's book, I now realize why so many Aussies often found my natural exuberance and enthusiasm just "too much." Luke Zimmerman points out cultural differences like that, along with supplying readers with lists of Aussie expressions and slang words one needs to understand just what the heck the Aussies are saying.

Zimmerman has packed a lot of "what you need to know" into this very short book. He does it with a chuckle and a lot of love for his adopted country. He speaks of "our slang," "our accent." Zimmerman is from the Netherlands, but has embraced this sunburned country as his own. To an ex-pat, that is very endearing. And no book on Australia would be complete without mentioning Australia's favourite spread: Vegemite! Our family has it shipped to us in Canada by our family back in Australia. It's black, salty, and ... are you ready for this? It's made from the sludge left at the bottom of the barrel after making beer. Sounds dreadful, doesn't it. But actually it's very nutritious, loaded with vitamin B, and delicious on hot buttered toast!

It's delightful reading about things like Vegemite in Aussie English and Culture. It's also great fun hearing some of the explanations given for Aussie "mumbling." Yes, listen carefully when they speak because Aussies swallow the ending of words, shorten others, and mumble. Why do they mumble? Well, one story has it that it's because of the Aussie flies: they are so plentiful and persistent that it's not unusual for them to fly happily into your mouth. So, mumble instead of letting flies dive in for that bit of sausage you just shoved into your gob!

Put another shrimp on the barbie, wouldcha mate? And Avagoodweegen! Oh, sorry, you don't speak "Strine"? Well, have a good weekend, anyway!