A Cabin In The Woods Away With the Fairies 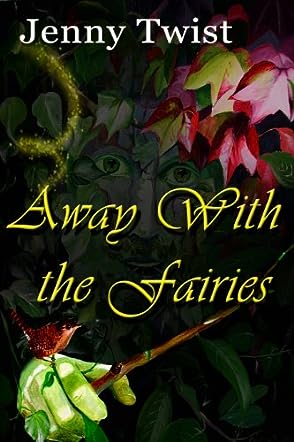 Jenny Twist was born in York and brought up in the West Yorkshire mill town of Heckmondwike, the eldest grandchild of a huge extended family.
She left school at fifteen and went to work in an asbestos factory. After working in various jobs, including bacon-packer and escapologist’s assistant (she was The Lovely Tanya), she returned to full-time education and did a BA in history, at Manchester and post-graduate studies at Oxford.
She stayed in Oxford working as a recruitment consultant for many years and it was there that she met and married her husband, Vic.
In 2001 they retired and moved to Southern Spain where they live with their rather eccentric dogs and cat. Besides writing, she enjoys reading, knitting and attempting to do fiendishly difficult logic puzzles.
Since moving to Spain she has written four novels and numerous short stories.
In July 2018 she was awarded the coveted TOP FEMALE AUTHOR award in Fantasy/Horror/Paranormal/Science Fiction by The Authors Show

Away with the Fairies by Jenny Twist is a sweet short story about a young girl who goes on an adventure in which they learn just how strong a family is. The story begins with June and Lucy, both of whom are sisters. Lucy suffers from a medical condition that puts her in a trance every so often, although her grandmother says that Lucy is actually visiting the fairies. One day, June stumbles across an odd opening in the wall, which is later shown to be a gate to the fairy world. When Lucy goes missing, both June and her parents have to travel into the fairy world to get Lucy back. In this brief, yet enchanting story, Twist illustrates how a sister’s love can bring a family together.

Essentially, the story is about a parent’s worst nightmare. You have Ben and Monica who are desperately trying to find their little girl, as the police keep thinking that they might be looking for a dead body. Still, it was June who managed to lead them to Lucy by humorously magical means. While I do believe the story would work better as a novel, considering the fact that there are a lot of details that could be fleshed out, it still told a complete story. The ending was also a bit cliche, but it didn’t detract from the story that much. As such, I would recommend it to those who enjoy the works of Sally Gardner and Gail Carson Levine, and also to fairy tale lovers in general.