Jayden Blue and The Sword in his Shadow Have You Seen My Reflection? Pawns of The Prophet Mentchu-Hotep and the Spirit of the Medjay 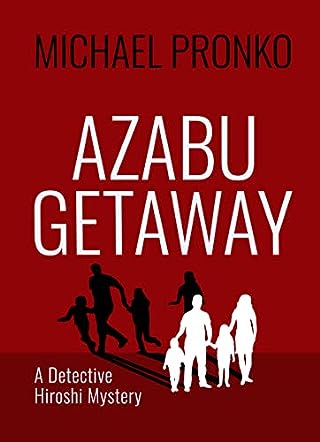 Michael Pronko's mystery novel Azabu Getaway: Detective Hiroshi Series Book 5 is a gripping murder and crime story set in Tokyo. Detective Hiroshi Shimizu is a forensic accountant, investigating financial crimes. He is fluent in English, having lived in Boston for some years. Joseph Leung, CEO of the international Nine Dragons Wealth Management firm, is found murdered in his firm's office in Tokyo. As Hiroshi and his team of detectives investigate Leung's brutal murder, another murder is discovered in an apartment in the affluent Azabu district. The luxury apartment is the home of the Walsh family. Patrick Walsh, an American, is a highly successful investment manager and his wife Miyuki is a bank account manager. Their daughters, Jenna aged 9, and Kiri aged 5, are missing from their apartment. Hiroshi and his team of detectives take on the investigations for both murders and the search for the missing young girls. Fast-paced and action-filled, the story grows more terrifying with every twist and turn!

I enjoyed reading Michael Pronko's Azabu Getaway for its remarkable cast of characters and strong themes. I liked the multi-faceted, convoluted storyline of murder, kidnapping, and financial crime. In particular, I liked Detective Hiroshi Shimizu's character development, as well as that of Patrick and Miyuki Walsh. I appreciated the rich evocative details of Tokyo, its people, its many distinctive areas, and its culture. That brought to life the characters as individuals and their interpersonal interactions with others. I was drawn deeper into the story, as I read the characters' backstories, motives, and conflicts, their difficulties, different insights, and perspectives. Details about investments and greed are interwoven into the novel, and that underpins the flow of money and crime in the novel. The story's most intense and emotional moments were those of the Walsh family, which were heart-wrenching! Patrick and Miyuki's world turns upside down when their daughters are kidnapped. That is an account of love, fear, despair, pain, turmoil, anguish, and remorse. This is a masterful story, well-crafted, with incredible characters, and strong thought-provoking themes!

Patrick Walsh works for the Nine Dragons Wealth Management in Azabu Getaway by Michael Pronko. Patrick is sent to Wyoming to set up new accounts for clients. Joseph Leung, Patrick’s boss, insisted he stayed longer in Wyoming. Miyuki, Patrick’s wife, files for divorce after receiving incriminating photos of him and a blonde. Patrick goes back to Tokyo to get his daughters Jenna and Kiri. Tim, the head of a group helping foreigners in custody battles, is helping Patrick. Tim called Patrick to say that there is a change of plans. Patrick and his daughters cannot go to the airport. Sanjay Mehta found the body of Joseph Leung in his office and calls the police. Detective Hiroshi Shimizu is called to the scene. It looks as if Patrick might be responsible for Leung’s murder, but something does not make sense. Detective Hiroshi Shimizu is determined to get to the truth.

The plot in Azabu Getaway by Michael Pronko is complicated. The story is fast-paced, and I enjoyed the many twists and turns. It is full of action with no dull moments. The story is packed with intrigue and suspense. It is a fascinating read and it captured my interest. I felt compelled to keep reading to see where this was going. Azabu Getaway is excellently written. I enjoyed learning about certain customs in Tokyo. The characters were well-developed and strong throughout the plot. Every character had a unique background and contributed to the success of the story. There is a helpful list of all the characters in the front of the book. I enjoyed knowing exactly who is who. Readers who look for nonstop action will find plenty to like in this story.

Azabu Getaway is a work of fiction in the murder mystery subgenre and forms the fifth novel in the Detective Hiroshi mystery series. It is best suited to the general adult reading audience owing to some scenes of violence and was penned by Michael Pronko. Kidnap, financial crime, and the seedy underbelly of corporate conspiracy are the adverse circumstances in which Detective Hiroshi finds himself this time, especially when he starts poking around into the business affairs of some of Tokyo’s most elite investors. Two missing daughters cause a family’s life to fall apart, and Hiroshi must discover how their international financial connections might be linked to the crime.

Having previously read several works in the Detective Hiroshi series, I was delighted to return to the sleazy, dangerous underworld of crime in Japan for this excellent adventure. Michael Pronko has a way with a narrative that gets you deeply invested in the culture, personality, and atmosphere of the places he takes you to, and soon you find yourself reading between the lines and searching for every detail alongside Hiroshi and the team. I liked the new additions to the cast of characters, both helpful and sinister, and the financial aspect of the crime story was an interesting twist on traditional mystery and a fascinating insight into Japanese culture and attitude to wealth. I would certainly recommend Azabu Getaway for fans of the Detective Hiroshi series already and for those who are looking to get into a modern and highly original hard-boiled mystery series.