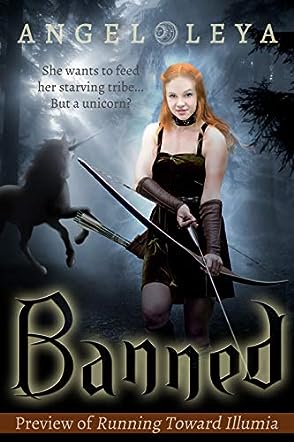 Angel Leya focuses on creating clean young adult fiction with a touch of magic and romance. It also happens to be what she enjoys reading, and she blogs regularly about her latest reads. With a tendency towards writing different shades of fantasy and light sci-fi, her stories are intended to transport readers into worlds of possibility and wonder. Her latest story, Lost, Part 2 of Running Toward Illumia is available for preorder! When not writing, you can find her daydreaming about her stories and searching for her own adventures. Feel free to drop her a line any time. She hopes you enjoy her fiction as much as she enjoys writing it!

Unicorns were a rare sight in the Mist, so Astrea could scarcely believe it when she saw the wonderful creature. Doubt and superstitions plagued her mind as she watched the grazing creature. The tribe needed food, and this beast would keep them fed for days, but there was the curse to consider. Anyone killing a unicorn would be cursed, so said the stories from Illumia, but then did these stories hold any weight when her own tribe was banished from these lands?

Just as the Banished didn't belong in Illumia, so too Astrea had never belonged here. Part of her hoped that by delivering this magnificent creature she would finally gain acceptance, but instead she gained something else; guilt. The tribe intended to eat the creature. She had hoped they would spare it, but knew in her heart it would not be so. She also heard its words, a curse on anyone who would taste  its flesh. She seeks guidance, but the answer she receives is not at all what she expected. Discover a world of fantasy and secrets in Leya Brown's Banned: A Young Adult Fantasy Adventure (Running Toward Illumia)

Banned by Leya Brown is  a charming short tale and definitely one I want to read more of, given the abrupt cliffhanger finish. You'll be drawn into the unspeakable decision Astrea faces, and be pulled along for the ride. I found this book intriguing with a good level of depth to the main character for such a short story. A great short read, and a brief adventure in fantasy that will leave you wanting to find out what happens next.