Stranger in a Familiar Place

Battle of the Beetle 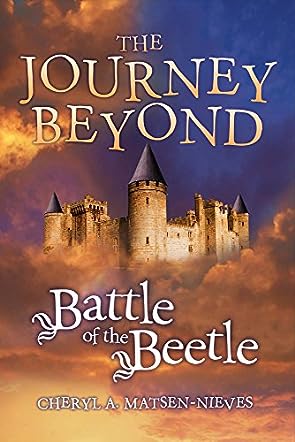 Writing for children and teenagers is my lifelong passion.

Please join me and let’s travel on this Journey Beyond together. Let’s start blogging it up at I.like.to.blog.it.up@gmail.com and share your comments and thoughts. Stay tuned for series 2 because many of your questions will be answered!

Battle of the Beetle: The Journey Beyond is a children's fantasy novella written by Cheryl A. Matsen-Nieves. Raphael and his companions, Frogeye, Sister Seven and Haniel, are being attacked by a gigantic beetle. It set its sights on Haniel, flew high into the sky, and then turned and plummeted at her, piercing her throat and beginning to feed on her blood. Raphael grabbed his sword and struck at the giant bug, carving off a piece of its wing, but the bug was not affected and reacted by flying into the sky once more to attack Raphael in turn. Raphael was ready and waiting with his sword, but the bug was wily and turned at the last minute, stabbing Raphael in the hand. The beetle then went on after Frogeye. No matter how hard they fought, the brave company seemed to have no way to combat this foe, until they invoke the forces of the universe for assistance.

Cheryl A. Matsen-Nieves' children's fantasy novella, Battle of the Beetle: The Journey Beyond, is a whimsical New Age tale that is original and entertaining. While I cringed at the thought of the beetle's eyes bubbling and dripping like lava, I imagine the targeted audience will be clapping and cheering as the persistent foe gets his comeuppance. Matsen-Nieves uses snappy dialog, idioms, rhymes and word play to keep the hilarity and whimsy going throughout this slightly different epic fantasy. This imaginative story should keep readers giggling and reading further as the adventurers battle bravely on despite overwhelming odds. Battle of the Beetle: The Journey Beyond is recommended reading for children who love fantasy.

Hi Aunt Cheryl, I read your book today and called you to let you know my thoughts. If I was a book reviewer, I would rate your book 5 out of 5 stars. Your book was awesome and I especially like Sister 7 because she is really funny. Looking forward to your next book. Maybe you can make your next book a lot longer.

Travis Numis says:
when can we look forward to the second book??? I thoroughly enjoyed reading your first book and can't wait to see what happens...as an educator who specialized in a literacy program to help kids reach their lexile levels according to their grade I believe this book should be in the school system across the country....it kept my interest and I could not put it down...I believe kids will feel the same once given the chance to read this wonderful story!

I agree with Travis. Your book left me and my grandson wanting for more. I thoroughly enjoyed reading your book with him. It kept us so captivated. It's sometimes hard to keep a child interested in a book. This book kept his attention. The characters were delightful! We cannot wait to join you on the next journey!

Hi there. We bought your book at Mackey's Orchards a couple of weeks ago. We had a nice conversation with you about my son not liking to read as we sat and ate our ice cream. Well, he opened up your book tonight, started reading and said “mom, this is really good!” At the end of the first chapter he said, “Mom we have to get the next book!” Someone is hooked!!!
Thank you for writing a book my son actually wants to read!
Jen

I loved the "journey". GREAT READ FOR ALL AGES. This book holds your attention and kids love it. As an educator this book has the qualities that we love to see in a book. The adventures are uniquely entwined into the characters and hopefully there will be a second book.

This is a wonderful children's book. Get it!

Everyone has a gift. Some have gifts that are magical and save lives. Others have gifts of compassion, love and friendship. Raphael and Haniel's gifts have a special purpose, to fight the evil that surrounds them and, in this story, the evil is a huge beetle. But it is Frogeye, the one-eyed frog friend, a prince in its own right, who must really save the day.

This is a fantasy adventure that will thrill all young readers. Cheryl A Matsen-Nieves leads the reader through the plot using mostly dialogue. Whilst this makes the reading lighter and easier, more descriptive passages would be helpful, including some backstory to prepare the reader to understand the protagonists' quest. There are a lot of surrealistic episodes, made almost believable by the characters' exchanges amongst themselves.​ For example, Frogeye, the one-eyed frog, exerts more power than anyone thought he could, especially when he suddenly displays more than one eye, only to revert to his one-eyed state. The magical tree, known as the Sister Seven, has a great sense of humor and manages to keep the rest of the mismatched troupe of adventurers in line.

The beetle, the very huge beetle, maliciously appears out of nowhere and causes great havoc. The motley group of adventurers stands together, but one of them gets seriously wounded by the beetle. Another adventure develops as the cast search for some magic to heal the wounds inflicted by the beetle. And, yes, again, it is the one-eyed frog, Frogeye, who plays a significant part. An interesting tale and a lively adventure of fantasy for young readers.