Alycat and the Cattywampus Wednesday 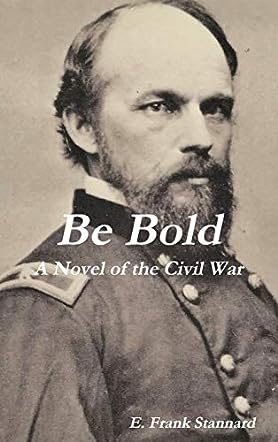 The title of E. Frank Stannard’s historical novel, Be Bold, comes from the dying statement of Samuel Stannard to his son George on the battlefield; “... be bold and mighty forces will come to your aid.” As son George, with his floppy hat and beautiful white steed Charger, struggles through his life, he needs to remember these words many times. As a boy, George joined the Canadian Rebellion of 1830, where he witnesses his father shot and killed. Father and son had joined a group who objected to British Canada’s policy of returning escaped slaves from the U.S. to their owners. Later, from the hamlet of Georgia, Vermont, George Stannard is the first volunteer of that state to join the northern forces against the South. Be Bold follows George’s military career and personal life from his boyhood on their farm, through his military training in Washington, his courtship with the beautiful and faithless Helen, and through many battles, most notably Gettysburg and Fort Harrison.

I found the author’s methodology ingenious. It begins with the struggle for Richmond at Fort Harrison where George, then a brigadier general, loses his right arm in the vicious fighting. The first half of Be Bold consists of flashbacks of his life up until that point as he recuperates from his wounds, conversing with visiting poet Walt Whitman and his fellow wounded comrades. We follow all phases of his growth. The author’s research must have been immense, down to the streets of Burlington, the clothing, the tools, the horses, and farms, even a house of ill repute. And, of course, the battles, especially Gettysburg where the once-scorned Vermonters were instrumental in turning the tide of Pickett’s Charge. In a short review, there is simply not enough space to praise this outstanding work of literature. Though General Stannard is not the first hero one thinks of from the Civil War, this book makes me think he should be. My praise not only for the subject but for the power and beauty of the writing is unlimited. If you have any interest in the Civil War or even in nineteenth-century American history, you must read this book. For author E. Frank Stannard, I can only shout, “Huzzah!”

Be Bold: A Novel of the Civil War by E. Frank Stannard is a biographical/historical novel about one of America’s underrated heroes, General George J. Stannard, an important Union general in the American Civil War. The story opens with a bang, as General Stannard calmly leads his men to stand firm against General Robert E. Lee’s main corps of Confederates. It is in holding the captured Fort Harrison against a Confederate counterattack that General Stannard receives one of his severe wounds where his men feared that he might never wake again. And he is the one person the Union cannot afford to lose, for he has led his men in every battle considered as the big battles to end an awful chapter in America’s history: Bull Run, Harper’s Ferry, Cold Harbor, and Gettysburg.

Be Bold has truly given readers a significant take on the life of its subject. While many are not familiar with Stannard’s contribution to the shaping of America’s history, it is comforting to know that authors like E. Frank Stannard make an effort to pay tribute to such heroic figures. This novel is not confined to battles alone as it chronicles the beginnings of a hero in the making by giving you flashbacks of his growing up years. This is part of the aspect of E. Frank Stannard’s creative license. He also adds appropriate dialogues and descriptions when necessary to capture the accounts of people, settings, and home life when historical documentation is not available. The book accomplishes its aims. This historical novel is very enjoyable for its well-researched plot, thoughtful characterization, and dramatic time period that evokes patriotism.

"Be bold and mighty forces will come to your aid." While bleeding to death in Virginia, General George J. Stannard—who had led thousands in different battles—fears his death would put his fellow soldiers in a more perilous situation as they would be without a competent leader. He has no choice but to survive! Be Bold reveals the life and times of General George J. Stannard through the Civil War in the 1800s. E. Frank Stannard delves into an important part of the history of the United States and creates a fictional story mixed with historical facts about the Civil War, Abraham Lincoln, slavery, prostitution, theater, and more. As George goes to fight in different challenging battles, he must make a choice to continue fighting for love or come to the conclusion that happiness in marriage is only a myth.

It takes a special kind of skill and talent to narrate a story about a historical personage as if they came back to life to tell it themselves. E. Frank Stannard does a remarkable job of depicting the thoughts that could have been going through the minds of his characters centuries ago, and it is surprisingly believable. The vivid descriptions extend beyond the individual characters to the environmental and social situations of the 1800s, which made me feel like I was in the streets of New York during that period. Be aware of gory war scenes and some mildly sexual scenes. From fast-paced gun battles and cute romantic exploits to chic, elitist gatherings and touching father-son moments, there is a lot to like about Be Bold. It is highly recommended to all fans of historical books out there.