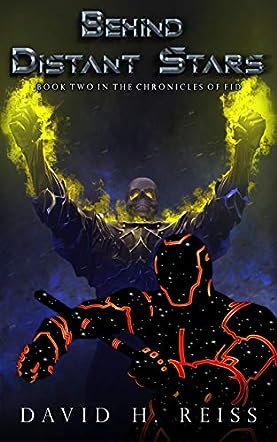 A man must choose whether to allow himself to be consumed with anger and bitterness or allow love to change his identity in the thrilling science fiction novel, Behind Distant Stars (The Chronicles of Fid Book Two) by David H. Reiss. Brilliant scientist and kindly adoptive older brother Terry Markham has a secret identity. By day, he is CEO of a large, well-known Biotech corporation. By night, he moonlights as a super-villain, Doctor Fid. After losing his little brother in a war between hero and villain, Terry, the nerdy, overly bright introvert, ceased to exist and the infamous and most feared super-villain Doctor Fid rose from his ashes. Nearly two decades later, Terry finds himself in an unprecedented quandary. Recently, through random acts of empathy, Doctor Fid is presumed to be becoming soft in the public's eye. As a guardian to a young AI girl, Whisper, Terry feels certain moral responsibilities that are causing his anger to falter long enough for him to wonder if maybe he should don the white cape of a hero and allow the past to rest. Struggling with the looming decision of allowing his villainous ego to consume him completely, or cave in to his sister's desire for him to be the good, kind person she believes him to be, Terry is befuddled. With seemingly founded rumors floating around the media that he is changing for the good, Terry decides to play the reformed hero long enough to gain the public's trust before devastating them with his evil acts once again. How much can his playing the hero cost, anyway? Will Terry be able to allow the pain of his past to finally heal? Or will he lose everything he loves with his foolhardy plan?

Hero or villain? Discover the superbly constructed world of super-heroes and super-villains. To the world, Terry Markham may be wealthy and have it all, but beneath the surface he is broken. Devastated by the loss of his beloved little brother, twenty-one-year-old Terry purposely chose the life of a villain. Nearly twenty years later, he is fighting niggling doubts concerning his chosen path. With an adoring little sister and the confidence of a super-hero to make things all the more confusing, Terry is easily the best anti-hero that I have ever had the pleasure to read. I enjoyed his many plights and his sense of humor kept the story from becoming too dark. I appreciated the author's scientific knowledge concerning the many aspects of Terry and Whisper's world. The transition between the past and the present was flawless; I admire the author's ability to give just the right amount of backstory, so as not to bog down the story, but still keep the reader deeply engaged. It is rare for me to discover a book so flawless in execution. This story was a perfect blend of tragedy and triumph, villain and hero, good versus evil. I savored every minute of it! It was such a pleasure to read. A beautifully written book, I would recommend it to fans of the technologically advanced and reluctant heroes such as Doctor Who.