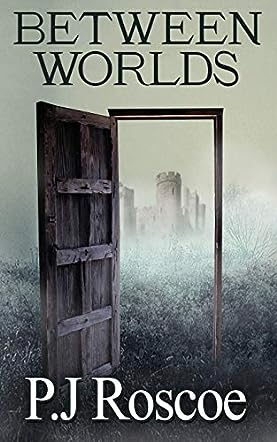 This is my fourth novel. I wanted to explore the problem of 'people can't trust you if they think you're crazy'... But what if you aren't? What if you are telling the truth? problem? I love the supernatural and historical and strong women - a good combination

Between Worlds by P.J. Roscoe is a spine-tingling mystery novel about a woman who time slips into sixth century England. After missing for months, Emily is discovered at a grisly murder scene. She is wearing garments from another era and holding a sword that dates back to the sixth century. When she is found, Emily is lying in a pool of blood next to a headless man's body, sobbing uncontrollably and screaming incoherently. Due to the trauma and the paranormal circumstances, Emily has selectively lost the use of her voice and her memory. Because she is the only suspect in the murder investigation, she is placed in a psychiatric hospital. The doctor's objective is to get Emily to speak and admit to killing the victim. However, what Emily knows and has experienced isn't believable. Emily is already in a psych ward, so how will she ever get out if she tells the truth?

Traveling back to the era of Arthur and his Knights of the Round Table is an enthralling venture into the thrilling historical novel, Between Worlds, by P.J. Roscoe. It is a gripping story that alternates between two different centuries. The contrast between the two different worlds is fascinating and skillfully done. The author takes the reader between the past and the present with ease, melding together a story of drama and passion. The captivating imagery of the settings enhances the plot and storyline, leading to an unexpected and twisted conclusion. This book is a brilliantly written, fast-paced, action packed novel. Its engaging characters bring the brutal and violent living environment of old London to life while touching on some of the horrific and unfair forms of modern day justice. I would recommend this book for more mature readers as it contains sexual situations and violence.