Billy and the Monster who Loved to Fart 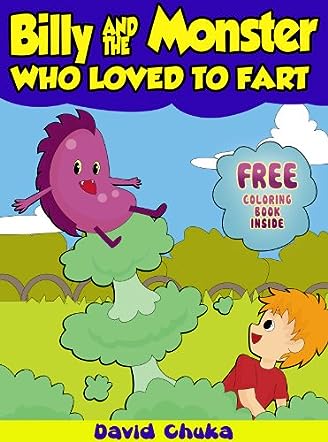 David Chuka lives in London with his lovely wife and two adorable children. His family are usually the first people to hear his funny and quirky tales. While he has written non-fiction material previously, he is absolutely proud to be called a children's book author. He loves writing stories that educate and entertain.

As a father himself, he has parents at heart when he writes. Bedtime has to be one of the best parts of the day for him as it gives him the opportunity to bond with his little ones. He believes you'll enjoy sharing his stories with your loved ones.

He would like to keep you updated on what he's working on and any giveaways he has on offer. Please subscribe to his newsletter at www.davidchuka.com

He has so many stories to tell and can't wait to share them with the world.

Billy and the Monster Who Loved to Fart by David Chuka is a children’s tale which ultimately attempts to teach children some basic manners, where the public discharge of flatulence is concerned. The little boy in this story, Billy, has a best friend who happens to be a monster. Not just any monster, however. Billy’s monster has a gastro-intestinal disorder, resulting in the frequent public discharge of flatulence, much to the chagrin of Billy’s classmates. Generally speaking, Billy’s classmates usually made some disgusted comment blaming Billy, and removed themselves from the toxic zone. However, one day an important man was coming to inspect the school. Billy’s teacher expressly asked him to be on his best behavior for the visitor, because if the inspector was impressed, he would tell the government to give more money to the school, to buy better food for lunches, more text books, and so on.

For reasons totally beyond human comprehension, on the morning the visitor was expected, Billy’s mother made him a breakfast consisting of boiled eggs, baked beans, mixed vegetables including broccoli, cauliflower and cabbage, and fizzy soda to drink. Not surprisingly, as Billy felt his tummy start rumbling, he noticed Monster was getting fidgety and looking like he was about to blow. Sure enough, when the visiting inspector asked Billy a question, Monster could no longer hold back, and cut loose with the loudest, longest, most disgusting gaseous emission ever! What a disaster. Is there a way for Billy to control the monster?

This book is inundated with the word “fart”. If that offends you, or is something you really don’t want to read to your children, this isn’t the book for you. On the other hand, I can pretty well guarantee they’ve already heard the word a great many times, and have no doubt said it, too. But you are the parent, so the choice is yours. Remember, though… the purpose of the book is to teach kids NOT to "fart" in public. So I recommend this book to everybody who doesn’t want their kids farting in public!