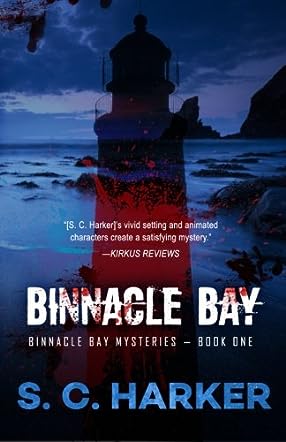 Binnacle Bay is a police procedural mystery written by S.C. Harker. Pat, the Binnacle Bay Chief of Police, has been called out to investigate a possible shooting at Gus and Sasha Murdock’s house on Sea Strand. When he arrives, a dog is barking and no one answers the door. From the back of the house, however, he can see Gus lying there on the floor by the fireplace. Sasha, a freelance investigative reporter and Pat’s ex-girlfriend, is missing and her car is not in the couple’s garage. Mayor Logan Butler, the neighbor who reported the disturbance, is convinced that Sasha killed Gus, but Pat feels there’s something else going on, based on the note that Sasha left him.

S.C. Harker’s police procedural, Binnacle Bay, is a marvelously introspective and absorbing mystery. It’s filled with the sound and fury of the rocky shoreline and the restless ocean, and the regrets and questions Pat has to deal with in trying to uncover the truth about Gus’s death and Sasha’s disappearance. Pat’s not alone in his hunt as Murphy, the dog he found barking at the scene, becomes his friend and companion during the investigation. Police procedurals are my favorite type of mystery story and Binnacle Bay was a delight to read.

I enjoyed following Pat as he interacted with his force and the other agencies involved in the case, and seeing how he dealt with the almost claustrophobic closeness of the small town of Binnacle Bay, where every move he made seemed to be instantly broadcast throughout the village. Binnacle Bay is brooding, atmospheric and very moving. It’s also an excellent police procedural that had me guessing till the very end. Binnacle Bay is highly recommended.

I am pleased and gratified by Jack Magnus's review which was comprehensive and thoughtful. His comments go right to the heart of my story without giving away the mystery. Thank you very much, Jack.


Binnacle Bay is an extremely enjoyable and well-written mystery novel, and it is even more impressive when you realize this is S.C. Harker's debut novel! It says in her biography that the author lived in a coastal area for a while, and you can see that in the realism she brings to her story. She does a great job of describing the bay, how people go about their business in this area, and just how life unfolds in this setting. I like the touches she adds of describing certain meals, a local restaurant that looks like a dive but has great food, the weather along the beach on a misty night, etc. The author puts you into this town, and you feel comfortable in her hands. It was all very believable and realistic to me. Also very realistic and well done are the dialogue and procedures that the protagonist Pat takes part in as he investigates the case. I was very impressed with these real-world tones and conversations, because in a mystery such as this you need to believe someone is following the normal steps that an investigator would take to solve a case.

The mystery unfolds well, with tantalizing clues and questions that you know will get answered, and you look forward to when they are answered. I especially like how Pat determines where a key secret room is located within a certain house! Very clever writing - especially because you are given the clue beforehand. I like that in a mystery - being presented with certain things that later turn out to be vital. A confident and skilled writer can pull that off, and S.C. Harker did.

The characters are well-drawn, distinct, and enjoyable to the story. Especially Murphy! I am an animal lover, and I loved his place in the story, his loyalty and his bravery. And I like that he is living somewhere happily ever after!

Loved this book! The setting was so well defined. The character development was excellent. I am hoping that the author will follow up with another winning novel. I loved Murphy!! I need to read about him again.

I Loved this book, It was a can't put it down book. I finished it before I wanted to. I am hoping that she writes another soon. She could even do a sequel to this first novel.

Great mystery! Am looking forward to the next book to learn more about the other individuals, and what link they may have to the first novel.