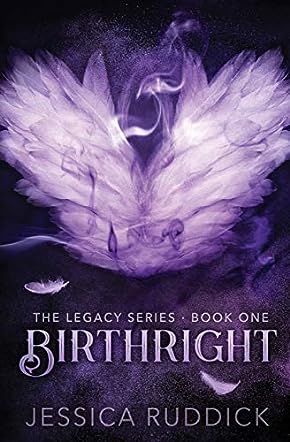 Birthright by Jessica Ruddick is an urban fantasy that twists the mythology on Reapers and hope. Ava doesn't have a life like other girls. She and her mother constantly move from place to place with a new assignment. It wasn't until her sweet sixteen that she learned the truth behind every move. Her mother is a Seeker for Grim Reapers, and so is Ava. She finds teenagers with white auras, and gives their names to their middle man, Xavier, so that their souls can be reaped. Ava doesn't understand fully what happens to the reaped souls, but she knows she's the cause of their deaths, and the guilt is getting to her. A new place means another name, another death she caused. When she narrowly avoids getting hit by a car, she finds herself drawn to her savior. Everything about Cole says he's not angel material, yet his aura is white. To make matters worse, she knows the Reapers will come for him. Though protecting Cole goes against the rules, she can't let him die, but can she save him from the Reapers?

Birthright is an addictive, fast-paced read, with a strong and feisty heroine. I couldn't stop turning the pages until I reached the end! Jessica Ruddick creates characters that are real and honest. Ava is closed off, sincere, with a strong conscience, feisty, and honestly full of heart. Cole has a strong and abrasive personality, but he's also smart and caring. Ava's mother is a fierce mother bear type, but she's also submissive to what this world has planned for her life. Despite the insanity of their world, both natural and supernatural, they're grounded and human. Each of the characters is flawed, but what makes them heroes in their own right is the fact that they keep trying. Her mother did what she did to protect her daughter. Cole made some bad choices, but he's gotten his life straightened out. No matter the situation, the characters don't fail to be realistic. It wasn't Ava's desire to protect Cole and fight against Xavier that won me over to her as a strong lead. It was the moment when she thinks back to when she went to the funeral of a girl whose death she caused. The guilt and sincerity of that moment make her story so compelling, and a must-read.