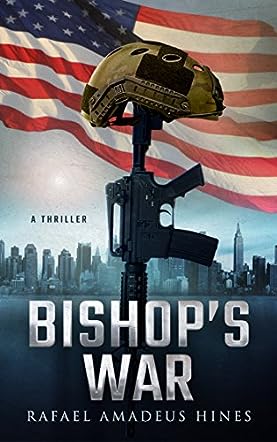 Rafael Amadeus Hines comes from a diverse family background with Panamanian, Jamaican, and Irish roots, and is a native New Yorker, born and raised on Manhattan’s Lower East Side. Dipping into his early Alphabet City memories, he loosely based many of the characters in the Bishop series on the people he grew up with, and adapted many of his own experiences into the book as well.
A former Jazz club owner and restaurateur, Rafael has worked in the financial and energy markets for over 20 years. On 9/11 he watched his office along with all the others in The Twin Towers come crashing down and, like many New Yorkers on that day, he anticipated follow up attacks to take place throughout the city. Years later he envisioned a lone citizen soldier preventing these attacks and the hero Sgt. John Bishop appeared on paper.
A voracious reader of suspense thrillers, his writing career was inspired by legendary artist-authors Elmore Leonard, John Sandford, Vince Flynn, Walter Mosley, James Lee Burke, and Tom Clancy. He is currently working on the third novel in the Bishop series.
Rafael has received over fifteen literary awards for his international bestseller and debut novel, Bishop's War, and he was recently added to the list of the World’s Top 200 Most Influential Authors (https://richtopia.com/inspirational-people/top-200-authors)

Bishop's War is the first book in the Bishop Series by Rafael Amadeus Hines, a great offering for fans of terrorist thriller and military novels. Special Forces Sergeant John Bishop is a decorated war hero who, on his return home from Afghanistan, doesn’t even get the opportunity to start his long-awaited retirement. A chance encounter engulfs him in a series of situations that destroy every hope of peace. He is pitted against terrorist operatives in New York, a billionaire with shady dealings and strong ties to the White House, and a powerful Afghan warlord who wants a piece of him. The conflict escalates at multiple levels, getting John’s uncle, Gonzalo Valdez, a crime boss, involved in the mayhem and he has his own motives. John has faced vicious enemies before, but nothing like what is tightening around his neck. Can he pull it off this time and come out as the hero he once was?

Rafael Amadeus Hines’ novel is action-packed and it features a multilayered plot. The characters are sophisticated and rock-solid and I enjoyed the entire mix. The characters' motivations are skillfully written and even the good guys always seem to have something tucked up their sleeves. The prose in Bishop's War is excellent and I was surprised that this novel is the author’s debut. It is so cunningly plotted and deftly written that I immediately became a fan. The author explores different plot lines and fills the writing with compelling characters. It takes skill and intelligence to handle so much in a novel but this author pulls it off easily. It is a delightful read for readers who are looking for that extraordinary adrenaline rush.

Bishop's War by Rafael Amadeus Hines is the first book in the Bishop Series, a fascinating terrorist thriller with a strong conflict and compelling characters. It follows Sergeant John Bishop, just returning from service in Afghanistan, who finds himself immediately embroiled in a terrorist war he never asked for. Instead of retiring quietly, he is pulled into a deadly conflict against terrorist forces in New York and powerful enemies with ties even to the White House. His uncle and crime boss, Gonzalo Valdez, gets involved and he has his own agenda. This story is packed with action and bloody encounters and has a well-crafted plot.

Bishop's War is intense and features characters readers will enjoy. The characters are drawn from varied backgrounds, including the Islamist terrorist world, the secret services, and the special forces, plus there are crime lords that also pull the strings. The plot is multi-faceted and there is a lot going on. It is interesting how Rafael Amadeus Hines handles the different plot points and writes so much into the story without distracting readers. I enjoyed the prose which is crisp and elegant, filled with wonderful descriptions and engaging dialogues. The author has a great gift when it comes to crafting compelling characters and writing settings that readers can easily visualize. Hines’ opening book in the series promises a wonderful ride and I can’t wait to read the next book in the series. It is a balanced story, fast-paced, and deftly crafted.

Special Forces Sergeant John Bishop is coming home, but wherever he goes death follows. After serving in Afghanistan, what he finds back home is a life-threatening event that culminates in a global war on terror. Bishop’s War is a military thriller offering from Rafael Amadeus Hines. Loyal soldier to a free country, nephew to a mob boss, and fiancé to a beautiful woman, Bishop’s homecoming was anything but the normal life that he hoped to have. He becomes the target of jihadis after he foils a terrorist suicide bombing. The plot becomes even more gripping with the involvement of a corrupt politician as well as Bishop’s mob boss uncle, Gonzalo “Black Cat” Valdez, who mobilizes his thugs to aid his nephew in quelling the highly-organized terrorists operating in American soil.

Military, politics, organized crime, and terrorism—put them all together and you get a recipe for a spine-tingling thriller. Bishop’s War is a triumphant debut novel that pulses with life from the details in the plot and character development. Rafael Amadeus Hines redefines the thriller genre by including a pervading underground culture and political corruption. The story taps into our fears and draws us to re-examine the genre. This novel creates an important link in the spy and thriller novels we have grown to love, and we might well come to appreciate John Bishop in the same vein as Jack Ryan, Will Robie, and Jack Reacher. Perhaps we can also hope to see Bishop form the basis of a movie and a video game.

I read the second book in the Bishop series by Rafael Amadeus Hines before Bishop's War and I picked it up randomly. The second book, which reads well as a standalone novel, compelled me to read the first, and it was a delightful reading experience. In this first entry, the author introduces readers to Special Forces Sergeant John Bishop, who returns from Afghanistan, hoping to have a peaceful time away from the painful experiences of war, but he is unwittingly pulled into a new fight against terror and powerful enemies, including a billionaire with great resources, corrupt operatives, and warlords. The enemies are strong and their influence reaches the White House. Gonzalo Valdez, his uncle and crime boss, becomes one of his greatest allies as he stands up against evil. But can he and his team win when enemies increase by the day?

Bishop's War is a wonderful story, thrilling and action-packed, with Rafael Amadeus Hines’s gift for great plot and character. This is one of the best books in the military and terrorist/thriller genres. For readers who enjoy fast-paced stories laced with action, it makes for a wonderful read. There is a lot of fighting in the story and characters that are really complex. Rafael Amadeus Hines is a great entertainer who brings to the minds of readers action that drives the adrenaline rush and explores the game of power on a whole new scale. The novel is expertly written, cunningly plotted, and readers find themselves exploring each layer of the characters as they evolve through the story. While John is a lead character and a compelling one, I fell in love with the way the author crafts Gonzalo Valdez and his family background. A riveting story that never lacks in action.

Bishop's War is the first book in the Bishop Series by Rafael Amadeus Hines. To say John Bishop’s life was complicated would be an understatement. When Special Forces Sergeant John Bishop retired from duty and came back home, he was hoping for a quiet life with his girlfriend. However, those dreams were destroyed in just a few hours. Bishop got in the way of a terrorist attack, and that brought him into a mess he could not get out of at all. He not only had the Feds after him but also terrorists who wanted him out of the way. If any other man was under the fire that way, they would not make it. But John Bishop had his mafia family and his Special Ops unit to back him up. Would he get out of that mess alive? Or was he entangled in something that would mark the end of the road for him?

Bishop's War was one of those terrorist thrillers that had me sitting on the edge of my seat and biting my nails. John Bishop was a mastermind with a deadly skill set. His connection with the mafia was a surprising yet welcome addition to the story. The plot was hard-hitting and filled to the brim with action. There was never a dull moment in the story, and it allowed me to get lost in the plot from the get-go. The real hero of this story was the author. Rafael Amadeus Hines created flawed yet realistic characters with habits and quirks that made them human. Another thing that the author excelled at was pacing the story so that readers were caught up in it. The setting was atmospheric, the story was spellbinding, and I enjoyed every moment of it.