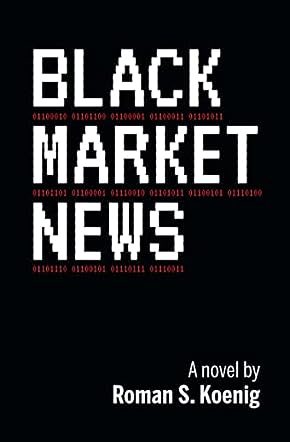 Black Market News is a work of fiction in the dystopian genre. It is suitable for the general reading audience and was penned by author Roman S. Koenig. The story follows Quinn Kellerman, a man living in a vision of America that exists according to the will of eState, a seemingly benevolent corporation that has infiltrated every aspect of its citizens’ lives. After an act of violence compels Quinn to action, he gathers his friends to create a news outlet that exists beyond eState’s control. Focusing their reporting on the truth behind eState and its dangerous leaders with their subversive methods for maintaining control, Quinn discovers he has the power to challenge the status quo.

As Quinn embarks on a mission to reveal the truth, we journey into a well-conceived and highly engaging work. The plot is a thought-provoking and intellectual one, which will make you feel uncomfortable at times as it parallels the world we live in, but this just added to the impact and the excitement that I felt during reading. This is a novel that will make you question and think deeper about the world around you, and one that will stay with you long after you put the book down. Author Roman S. Koenig has a keen sense of atmosphere, which he builds through tension and clues that he delivers in the clever use of both dialogue and scenic descriptions. The characters in this novel are fully realized and three-dimensional, and even our hero Quinn has flaws, which makes him a character you can easily connect with and learn alongside. I wouldn’t hesitate to recommend Black Market News to fans of dystopian fiction, and those that enjoy political and social thrillers.

Black Market News is a gripping dystopian thriller set in a not-so-distant future by Roman S. Koenig. When a deadly state-sponsored terrorist attack leaves journalist Quinn Kellerman with perennial leg pain, he vows to bring down the corrupt regime headed by eState Chairman Bruce Haskell. Three years after the blast, Quinn works for the Black Market news outlet named The Observator while simultaneously holding an official position in media mogul Walter Eddington's company. As Quinn tries to balance his underground and mainstream news coverage, Eddington's son, Owen, gets arrested and incarcerated by eState that sets off a tumultuous chain of events. Quinn and his best friend Jasper must now team up with Eddington's daughter Kay and uncover the truth to bring down Bruce Haskell.

Black Market News is an absorbing story that primely showcases the potential dangers of the growing influence of mega-corporations on the lives of the general populace. Absolute power corrupts, and Roman S. Koenig's novel captures the essence of that phrase. The potential consequences of an extreme and totalitarian capitalistic society are deftly displayed by Roman S. Koenig, who sets his story in a world where the truth is auctioned off to the highest bidder. The plot moves quickly with plenty of twists to make you keep turning the pages. The characters are compelling, and there are real-life parallels to the narrative that provide another layer of depth to the story. I felt fully immersed in Black Market News, and I would recommend it to readers who enjoy well-written dystopian novels.

Black Market News: A Novel by Roman S. Koenig is a dystopian novel that follows Quinn Kellerman as he tries to expose a man who is hellbent on destroying everyone’s lives for personal gain. Quinn Kellerman is a reporter, a man of words, and not many actions. His life is just fine until eState starts playing with the lives of people for the benefit of Bruce Haskell. He is the man on top, and he will do whatever it takes to remain on top, even if it means killing the people who protest against him. Among them are Quinn and Jasper, journalists with a plan to end Haskell’s reign of terror before it is too late. Although Quinn is a man of words, he knows words will not be enough this time. Together with his friends and the people he trusts, he embarks on a journey to bring down corporate greed and show its face to the people.

There are political undertones in Black Market News and these play an essential role in driving the story forward. The pace is perfect; not too fast or too slow. Quinn is emotional but is not driven by his emotions. He understands his situation and knows what needs to be done to gather information against eState to expose Haskell. The situations drawn by Roman S. Koenig are realistic, and I can imagine them happening in the near future. With the way we rely on technology and big corporations, something like this is bound to happen. Another thing that the author nailed is the relationship between Quinn and Jasper. They are two peas in a pod; they understand each other to the core and truly support each other. They make a great team that gets the job done. It is an exceptionally well-crafted novel!