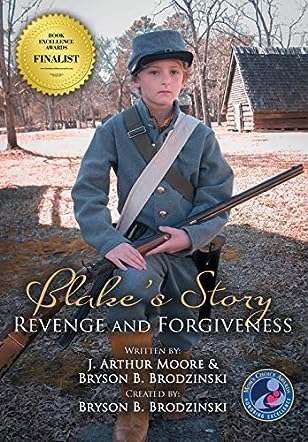 J Arthur Moore is an educator with 42 years experience in public private and independent settings. He is also an amateur photographer and has illustrated his works with his own photographs. Retiring after a 42-year career Mr Moore has moved to the farming country in Lancaster County Pennsylvania where he plans to enjoy the generations of family, time with his model railroad, participation in a local model railroad club, and time to guide his writings into a new life through publication. It also allows for traveling to Civil War events and presenting at various organizations and events about the boys who were part of that war.

The concept for this story was first suggested by Bryson Brodzinski, the 10- year old great-grandson of author J. Arthur Moore, on April 3, 2013. Pictures were taken, a character name was selected, and on the following day, Bryson began the prologue for the story. The two planned to email the story back and forth as it was developed. But Bryson’s busy schedule prevented this from happening.
On a trip to North Carolina in February 2014, which was to include a photo shoot at a historic plantation, Bryson laid out the story’s plot line, typing his thoughts in a word document. It would open with a letter, which Bryson wrote, then continue according to the created plot outline. Acknowledging Bryson’s heavy schedule of school and soccer, Moore would take this material along with the previous material, research the history, and draft the story.

Blake's Story: Revenge and Forgiveness, Second Edition is a historical fiction novel written by J. Arthur Moore with plotline created by Bryson B. Brodzinski. In April 9, 1862, Mrs. Micah Bradford, mistress of Bradford Plantation and Blake’s mother received a letter informing her that her husband had died in the battle in Shiloh. The US Civil War rages and Blake Bradford, eleven years old, is now consumed with the desire to avenge his father. He runs away from home and becomes a Confederate soldier. Blake is eventually wounded in Perryville, but a young Federal soldier helps him and he is taken into the enemy’s camp to get treatment. The two opposing soldiers eventually become friends and Blake’s idea of war will never be the same again.

Kudos to J. Arthur Moore and Bryson B. Brodzinski for coming up with the second edition of the historical fiction novel, Blake’s Story, Revenge and Forgiveness. Blake Bradford is but a child when he comes face to face with the loss of his father who fought in the US Civil War. He joins the war as an eleven-year-old boy with revenge in his heart, and this makes him a remarkable yet naïve character. It is not surprising if readers will be moved by the need to protect and guide this child as he embarks on a mission to avenge his father. The plot, however, goes in a direction that is most unexpected and herein lies the real lesson of Blake’s Story. The novel also offers a refreshing perspective about war as seen through the eyes of young soldiers during this time. Well researched and informative, this book is an effective way for young readers to learn about an event in the past that has greatly influenced the course of US history and also to learn to look at war through the eyes of Blake Bradford.