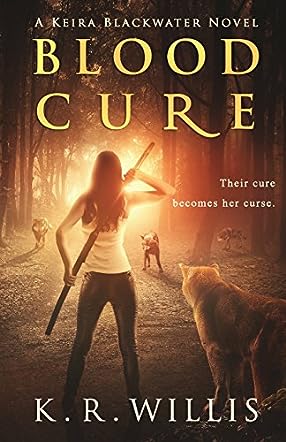 K. R. Willis grew up in the South dreaming about unicorns and fairies, and now lives in Oklahoma with her very understanding husband, three dogs, two horses, and tons of books. She's graduated from dreaming about unicorns to writing about vampires, werewolves, and anything else her mind can dream up. If it goes bump in the night, it's fair game in her world.

Blood Cure: A Keira Blackwater Novel, Volume 1 is a paranormal urban fantasy novel written by K.R. Willis. Keira’s happiest when she’s working in the converted Firehouse that’s now her classic car repair shop or working out upstairs with Sam, her childhood friend and business partner, who just happens to be the consummate martial arts trainer. She’d love to go out on a date again, but things just haven’t seemed to work out in that department for a while now. When she and her other best friend, Sally, go out for a night at the Blu Moon, a local shifters club where humans and shifters party and hang out, Keira finds herself chatting with a handsome Beta wolf named Brian Twofeathers, and she’s momentarily thrilled when he suggests a dinner date, but, of course, as usual, she screws that chance up. Keira’s got a special feature to her blood; it contains a substance that will turn humans who’ve been turned into werewolves back to their human state. She confronts her own fear of needles on a monthly basis to help the local hospital keep a supply of her blood on hand for just that purpose. When someone steals that supply, and the deaths of two werewolves and then a vampire are linked to her blood, Keira’s life is threatened by both an angry werewolf pack and the Vampire Council, and she has only a few days left to prove her innocence.

K.R. Willis’s paranormal urban fantasy, Blood Cure: A Keira Blackwater Novel, Volume 1, incorporates Native American mythology into an action-packed and suspenseful paranormal adventure thriller. Keira Blackwater is a marvelous main character. She’s strong, independent and relatively fearless, with the sole qualification to that being her fear of needles, which I and many others just happen to share. The descriptions of her workouts with Sam Lightfoot are a joy to read, and her interactions with childhood friends, Sam and Sally, work very well indeed. I also enjoyed seeing how Willis developed the character of the vampire, Leo, otherwise known as Leonce Trevelyan, who is initially seen as rather villainous. Willis’s descriptions of the werewolf packs, the Vampire Council, and her use of Native American lore are all first-rate and contribute to making this a highly absorbing and entertaining read. There’s something in Blood Cure to delight even the most jaded urban fantasy reader. Blood Cure: A Keira Blackwater Novel, Volume 1 is an absolute stunner of a debut novel, and it’s most highly recommended.