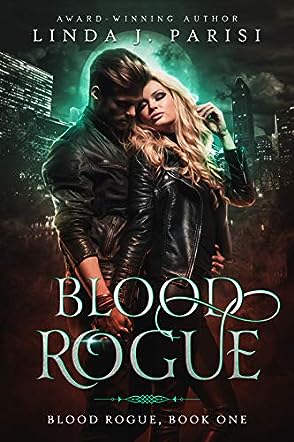 For over 900 years, Chaz has been a vampire, not by his own choice though, and so he has looked at it as a bit of a curse. Still, at the same time he became a Paladin, he swore to uphold the vampire population, sort of a police or enforcer role. He felt this was his duty to pay penance for his actions as a vampire. Of course, Chaz thought that all humanity left him when he became a vampire, but that is about to change in ways that Chaz could never have imagined. Stacy is just your average gal, or so she thinks. She worked in a blood bank, then became a forensic officer. A chance encounter with Chaz on the street is about to rock both their worlds. Chaz thinks it will be time with a beautiful woman that he takes a little blood from and moves on. Unfortunately, someone else has other plans, noting Chaz's interest in Stacy and marking her for destruction. Blood Rogue by Linda J. Parisi is the story of Chaz and Stacy, how he is forced to break all the rules to save her, and how she changes his mind about his humanity.

Blood Rogue by Linda J. Parisi is a different kind of vampire story. The vampire society is ruled by certain sectors, and they keep everyone in order with rules and the Paladin. There seems to be uneasy cooperation among them, but no real friendships, so it really highlighted the idea that vampires lost their humanity, which is a change from a lot of recent vampire novels. This story really focused on the humanity issue and the idea of keeping hidden from human society. The vampires also don't think they need humans for anything but blood. Stacy is about to use her skills in science to help answer some questions about things that are happening. In turn, the way she fights for them, even without them really trusting her, changes a lot of opinions about humans. This is the first in a series, so it does leave the reader with some questions and places to go in future books, which is good. Overall, the story is well written. This is a great read for a cold weekend.